Adam and Eve bear another son, Seth, and he and Cain start parallel generations.

Genesis 4:17-22, 25-26 – Cain knew his wife, and she conceived and bore Enoch. When he built a city, he called the name of the city after the name of his son, Enoch. To Enoch was born Irad, and Irad fathered Mehujael, and Mehujael fathered Methushael, and Methushael fathered Lamech. And Lamech took two wives. The name of the one was Adah, and the name of the other Zillah. Adah bore Jabal; he was the father of those who dwell in tents and have livestock. His brother’s name was Jubal; he was the father of all those who play the lyre and pipe. Zillah also bore Tubal-cain; he was the forger of all instruments of bronze and iron. The sister of Tubal-cain was Naamah.

And Adam knew his wife again, and she bore a son and called his name Seth, for she said, “God has appointed for me another offspring instead of Abel, for Cain killed him.” To Seth also a son was born, and he called his name Enosh. At that time people began to call upon the name of the Lord. 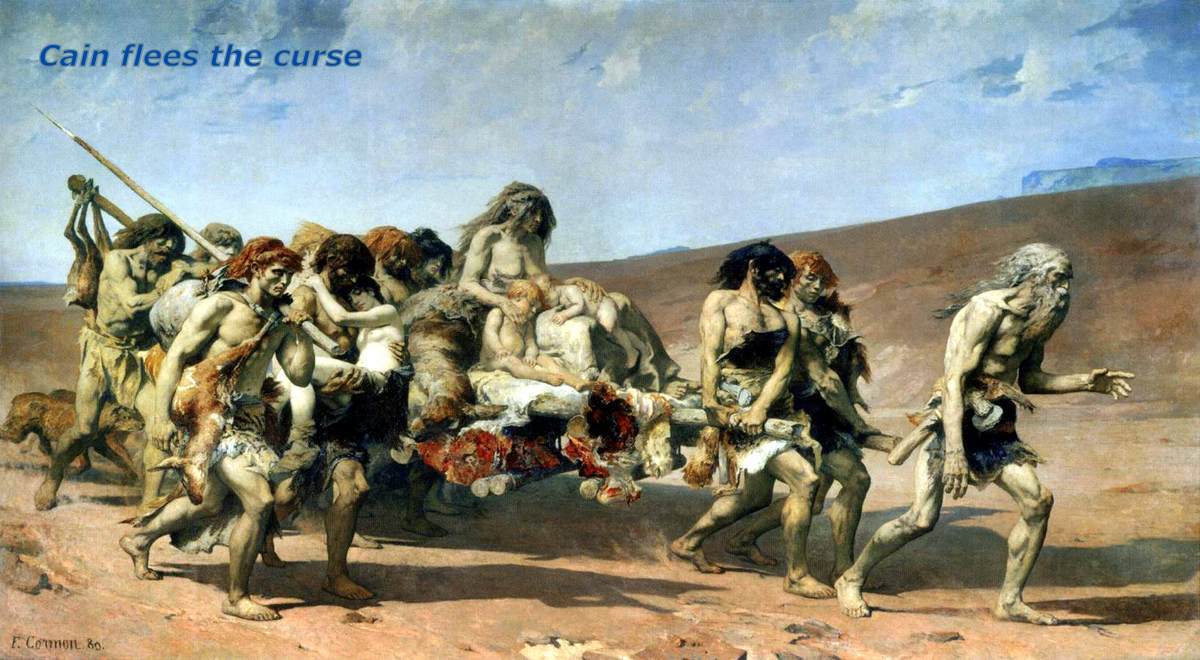 While Cain’s lineage was progressing to the East, Seth went on to father other sons and daughters in Mesopotamia, starting a multi-generational lineage of longevity known in the Bible as the Patriarchs, as described in detail in Genesis Chapters 4-5 and depicted in the simple diagram below.

The lifetimes of virtually all the antediluvian Patriarchs (those born before Noah’s Flood) are remarkably long in the Biblical record, ranging from Lamech at 777 up through seven who were over 900, including Methuselah at 969. Even the exception, Enoch, was said to have been taken up by God at the young age of 365. In the words of Gerhard von Rad, theologian and professor at the University of Heidelberg, “The long lives ascribed to the patriarchs cause remarkable synchronisms and duplications. Adam lived to see the birth of Lamech, the ninth member of the genealogy; Seth lived to see the translation of Enoch and died shortly before the birth of Noah. Noah outlived Abram’s grandfather, Nahor, and died in Abram’s sixtieth year. Shem, Noah’s son, even outlived Abram. He was still alive when Esau and Jacob were born!”

As Genesis 6:1-4 indicates in the box below, over time the lifespans declined, a process that began progressively after the Flood. In each generation the lifespan fell from Noah’s grandson Arphaxad who lived 438 years as the first postdiluvian Patriarch (born to Noah’s son Shem) down to 175 years by the time of Abraham. Many theories have been proposed to account for the exponential decay in longevity observed in the Biblical account, a topic that will be addressed later in our Kingdom BC narrative when we look more closely at the lives of the Biblical Patriarchs. 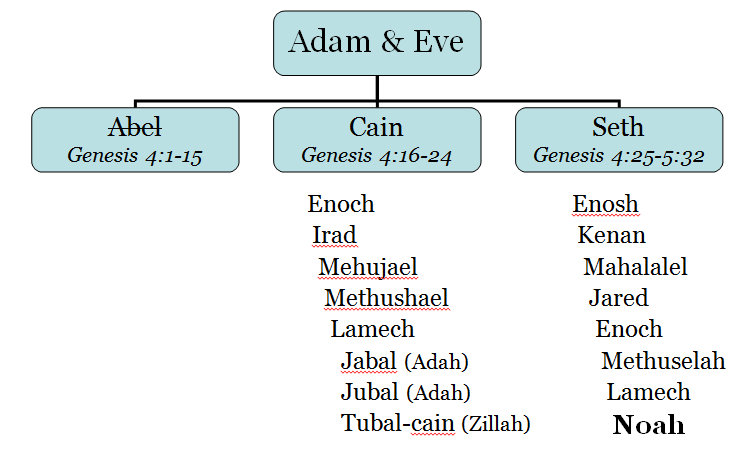 When man began to multiply on the face of the land and daughters were born to them, the sons of God saw that the daughters of man were attractive. And they took as their wives any they chose. Then the Lord said, “My Spirit shall not abide in man forever, for he is flesh: his days shall be 120 years.” The Nephilim were on the earth in those days, and also afterward, when the sons of God came in to the daughters of man and they bore children to them. These were the mighty men who were of old, the men of renown.

Where did the development of mankind go from here?

We are dating the generations of Cain, Seth, and the Patriarchs to about 4,000 to 5,000 BC, prior to written Hebrew. Early Sumerian writing dates back to about 3,500 BC, while most scholars date the onset of written Hebrew to much closer to our time, perhaps as early as 1,000 BC, with the earliest Biblical texts dating from about 600 BC or possibly even earlier. Therefore, the events spoken of in the first chapters of Genesis must be counted as history that was passed down from generation to generation orally until it could be committed to writing. From here on, however, we may begin to correlate what has been written in the Bible with the accounts of other cultures to add more material substance to our speculations. This is truly the border between prehistorical events that have been passed on by faith through cultural myths and buttressed to some extent by archaeological findings and those that have been documented historically.

Underlying our entire investigation is a very primary question: What has God’s role been throughout history? Has He been actively involved or did He make us and the intricate universe we live in, wind it all up like a “watchmaker,” and then step back to observe His creation and us ticking along on our own?

The new middle buttons below allow direct “short cut” navigation through a series of timetables starting back with Chart 1, which outlined the Days of Creation, and passing forward into a discussion about some of the difficulties in compiling accurate timelines. Our middle button route will then pick up our timetables again with Chart 2 which starts with recorded human history around 6000 BC and goes on through the BC and AD epochs of Charts 3-7 and culminates in Chart 8, which takes us from where we are in history now to the End of the Age and beyond.

We recommend continuing our detailed tour using the side buttons, however, especially for your early visits to our website. After taking a graphic look at the growth of the human population on earth, the first subject we will address is “Who is the King of all Creation?” and “What is His relationship to mankind and its kingdoms?” We will then move on into our timelines, synchronizing and comparing significant events, leaders, and developments in world religions and philosophies with those that have been recorded in the Biblical account.

After the Fall
Chart 1
Chart 2
Population