Many of us have become so accustomed to the story of Jesus that we fail to notice how unusual His earthly life was. Who do we know from personal experience or our knowledge of history that has a life story that even begins to resemble the one Jesus had?

After all this His life is then suddenly transformed at age 30 and He rises to prominence by being launched into a ministry characterized by powerful preaching and miraculous works. This is quite a fantastic biography for any human being to have, one that is not only surprisingly supported by historical studies and multiple witnesses but by the prophetic Word of God delivered centuries before His birth. Read it and ponder. Who was this man?

The Visit of the Wise Men

Matthew 2:1-12 – Now after Jesus was born in Bethlehem of Judea in the days of Herod the king, behold, wise men from the east came to Jerusalem, saying, “Where is he who has been born king of the Jews? For we saw his star when it rose and have come to worship him.” When Herod the king heard this, he was troubled, and all Jerusalem with him; and assembling all the chief priests and scribes of the people, he inquired of them where the Christ was to be born. They told him, “In Bethlehem of Judea, for so it is written by the prophet: “‘And you, O Bethlehem, in the land of Judah, are by no means least among the rulers of Judah; for from you shall come a ruler who will shepherd my people Israel.’”

Then Herod summoned the wise men secretly and ascertained from them what time the star had appeared. And he sent them to Bethlehem, saying, “Go and search diligently for the child, and when you have found him, bring me word, that I too may come and worship him.” After listening to the king, they went on their way. And behold, the star that they had seen when it rose went before them until it came to rest over the place where the child was. When they saw the star, they rejoiced exceedingly with great joy. And going into the house, they saw the child with Mary his mother, and they fell down and worshiped him. Then, opening their treasures, they offered him gifts, gold and frankincense and myrrh. And being warned in a dream not to return to Herod, they departed to their own country by another way. 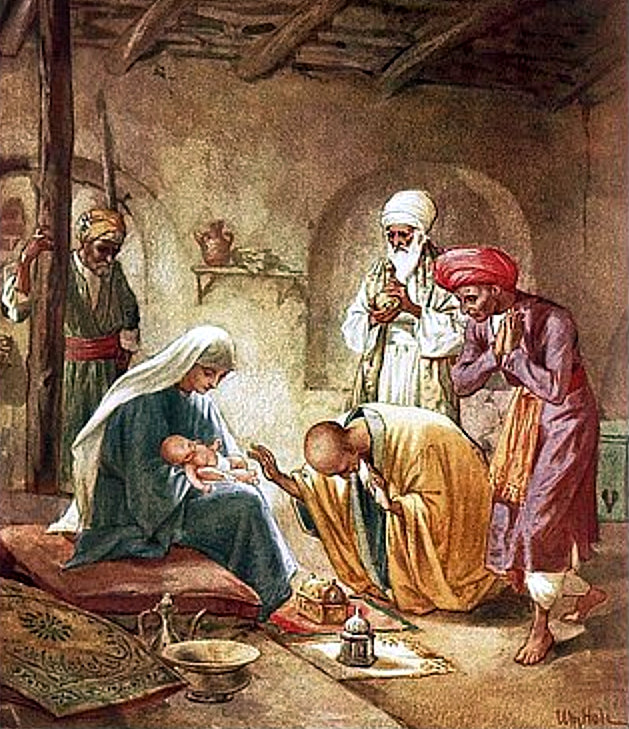 The Sojourn in Egypt

Matthew 2:13-23 – Now when they had departed, behold, an angel of the Lord appeared to Joseph in a dream and said, “Rise, take the child and his mother, and flee to Egypt, and remain there until I tell you, for Herod is about to search for the child, to destroy him.” And he rose and took the child and his mother by night and departed to Egypt and remained there until the death of Herod. This was to fulfill what the Lord had spoken by the prophet, “Out of Egypt I called my son.”

Then Herod, when he saw that he had been tricked by the wise men, became furious, and he sent and killed all the male children in Bethlehem and in all that region who were two years old or under, according to the time that he had ascertained from the wise men. Then was fulfilled what was spoken by the prophet Jeremiah: “A voice was heard in Ramah, weeping and loud lamentation, Rachel weeping for her children; she refused to be comforted, because they are no more.”

But when Herod died, behold, an angel of the Lord appeared in a dream to Joseph in Egypt, saying, “Rise, take the child and his mother and go to the land of Israel, for those who sought the child’s life are dead.” And he rose and took the child and his mother and went to the land of Israel. But when he heard that Archelaus was reigning over Judea in place of his father Herod, he was afraid to go there, and being warned in a dream he withdrew to the district of Galilee. And he went and lived in a city called Nazareth, so that what was spoken by the prophets might be fulfilled, that he would be called a Nazarene.

Luke 2:39 – They returned into Galilee, to their own town of Nazareth. And the child grew and became strong, filled with wisdom. And the favor of God was upon him.

The scriptural record is silent on Jesus’ early childhood years until Luke continues in the next section by recounting a noteworthy event that took place when Jesus was 12 years old. Biblical silence has not quenched human speculation, however. There are three possibilities about what Jesus’ childhood family life looked like after they returned to Nazareth. Dismissing the first (that the entire story is a made-up fairy tale from beginning to end), we are left with two main options to capture our imaginations:

1) Mary was about 14 when the angel visited her, and Joseph was an older widower, perhaps even as old as 90, with several children of his own. Joseph was prevailed upon by divine influences to marry Mary as a virgin (but pregnant out of wedlock) teenager, take her with him to Bethlehem for the mandated census and birth of Jesus, and then continue on to Egypt to avoid Herod’s wrath before returning home. What Joseph’s children in Nazareth thought about this or were doing during this time is uncertain. After coming back, Mary and Joseph reunited with his children and raised a blended family together with Jesus as the youngest child. Mary remained a virgin throughout her entire life and never physically consummated her marriage with Joseph as a sign of divine chastity, obedience, purity, and virtue. Jesus joined his father, and perhaps his father’s children, as a carpenter until He was called to ministry. There are many legends and teachings, stemming from the earliest years of the church, that have been called upon to support views like this. There is no straightforward biblical evidence to sustain it, however, and several features of the narrative strain not only the imagination but the biblical record that we do have.

2) Mary was a virgin of about 14 and Joseph perhaps several years older than that when Jesus was conceived. After receiving divine assurances that her pregnancy was a sovereign act of God and that they were meant to marry and raise Mary’s child together as part of God’s plan, they then left their village as a young couple to be counted in the census in Bethlehem where Jesus was born. When the Magi had visited and departed, the young family went to Egypt as instructed until they heard of Herod’s death. Only then were they free to return to Nazareth where Mary and Joseph settled back into the community with baby/toddler Jesus, did their best to overcome their local reputation of having conceiving a baby before getting married, were accepted as a sincere and dedicated couple, and raised a natural family of their own when brothers and sisters came along after Jesus. Jesus would have been the oldest child, the “big brother” to His half-siblings, and an example for them to follow. He was a devoted son and hard worker who loved children and was very comfortable with them. People in Nazareth knew the family. The biblical “dots” can be connected in a way that supports this view.

How do we handle such a discrepancy of views? Pray. Let God guide our thoughts and meditations. Recognize with humility that our human knowledge is incomplete and that “keeping the main thing the main thing” is part of preserving vital unity with others. As the Apostle Paul would write years later, “I therefore, a prisoner for the Lord, urge you to walk in a manner worthy of the calling to which you have been called, with all humility and gentleness, with patience, bearing with one another in love, eager to maintain the unity of the Spirit in the bond of peace.” 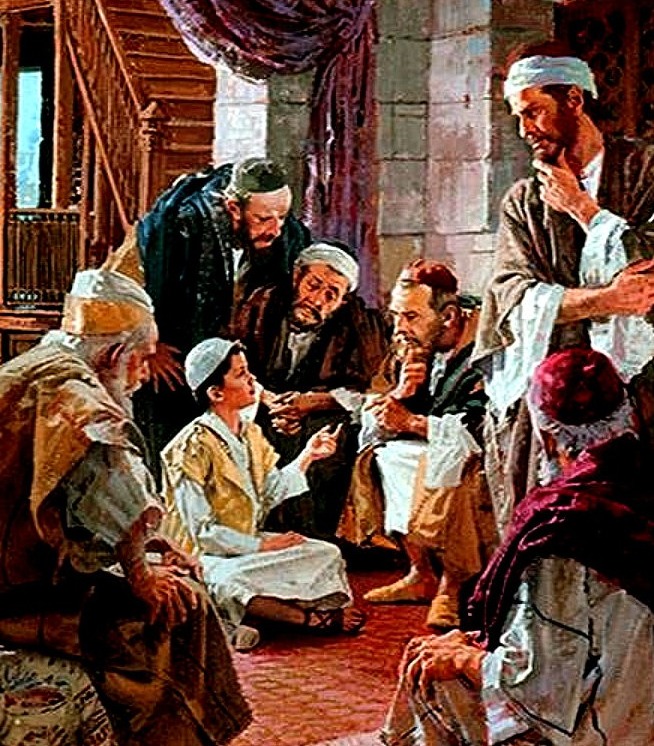 Jesus stays back in Jerusalem

Luke 2:40-52 – Now his parents went to Jerusalem every year at the Feast of the Passover. And when he was twelve years old, they went up according to custom. And when the feast was ended, as they were returning, the boy Jesus stayed behind in Jerusalem. His parents did not know it, but supposing him to be in the group they went a day’s journey, but then they began to search for him among their relatives and acquaintances, and when they did not find him, they returned to Jerusalem, searching for him. After three days they found him in the temple, sitting among the teachers, listening to them and asking them questions. And all who heard him were amazed at his understanding and his answers. And when his parents saw him, they were astonished. And his mother said to him, “Son, why have you treated us so? Behold, your father and I have been searching for you in great distress.” And he said to them, “Why were you looking for me? Did you not know that I must be in my Father’s house?” And they did not understand the saying that he spoke to them. And he went down with them and came to Nazareth and was submissive to them. And his mother treasured up all these things in her heart. And Jesus increased in wisdom and in stature and in favor with God and man.

Nothing is recorded in the Gospel accounts of Jesus’ life after this until He was baptized, empowered, tested, and commissioned for ministry at about age 30. However, it is inferred from the following account in Matthew that He remained in the village of Nazareth in Galilee and grew up with his family into full maturity working in His presumed father Joseph’s carpentry and construction business. The next we hear about Him in Nazareth, He is well underway with His ministry, having just delivered His Parabolic Discourse on the Kingdom (see Proclaimed Teachings coming up).

Matthew 13:53-58 – And when Jesus had finished these parables, he went away from there, and coming to his hometown he taught them in their synagogue, so that they were astonished, and said, “Where did this man get this wisdom and these mighty works? Is not this the carpenter’s son? Is not his mother called Mary? And are not his brothers James and Joseph and Simon and Judas? And are not all his sisters with us? Where then did this man get all these things?” And they took offense at him. But Jesus said to them, “A prophet is not without honor except in his hometown and in his own household.” And he did not do many mighty works there, because of their unbelief.

By continuing to use the Up and Down buttons in the middle you can navigate directly through our timelines. For each timeline we have been taking a detour using the side buttons to investigate events and topics noted in the currently active charts. In this detour we have been looking on our side excursions more closely at the unusual circumstances of His birth and later upbringing in Nazareth prior to the start of His ministry years. Before arriving at the next timeline, which addresses the ministry years of Jesus, let’s think about His name and what He might have looked like.

Nativity
5 BC to 30 AD
Ministry
Yeshua?