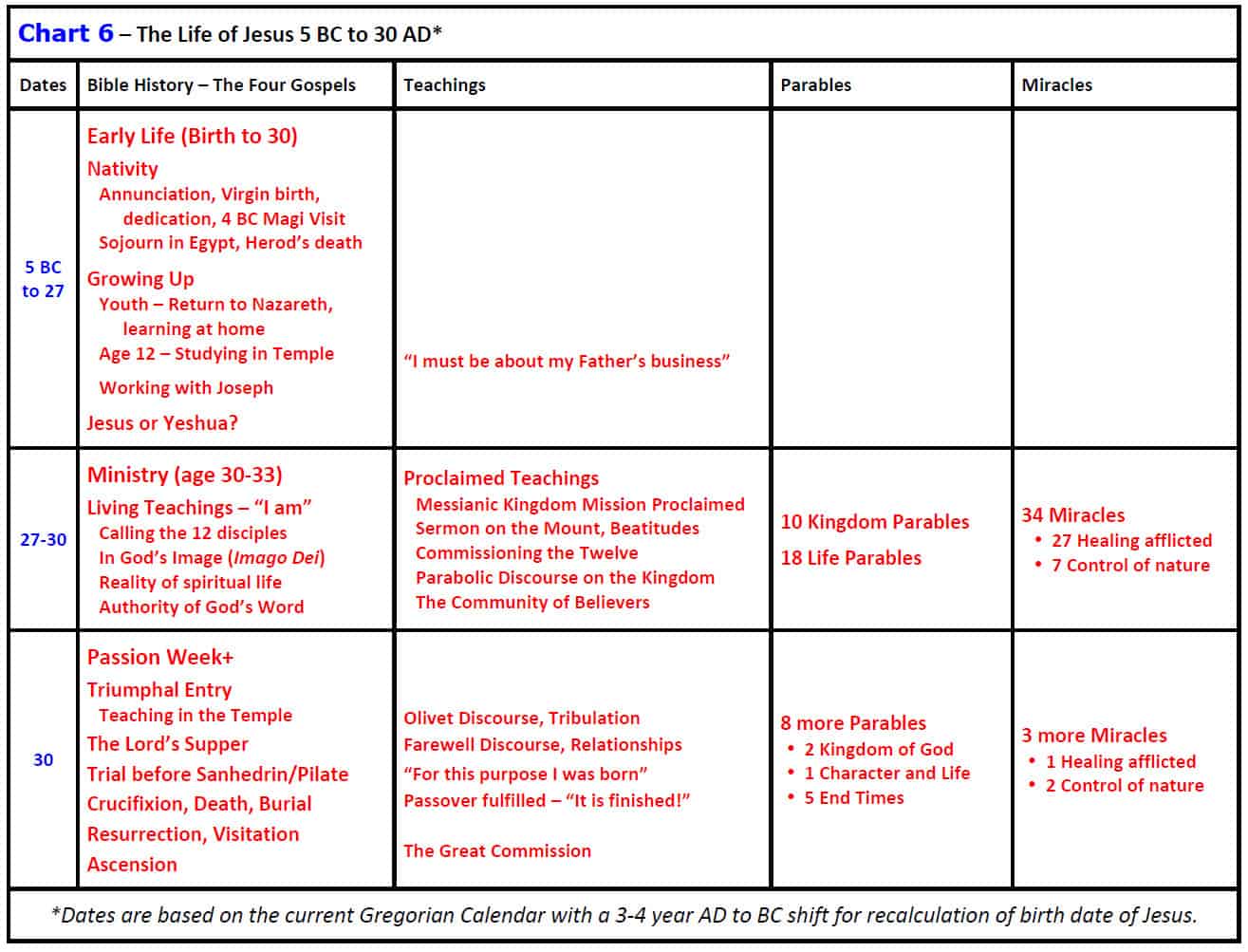 You’ll notice that everything in Chart 6 above, which focuses entirely on the remarkable life, ministry, death, and resurrection of Jesus, is highlighted and and marked in bold red to be examined in more detail in the following pages. In keeping with the timeline scheme we’ve been following this singular time period is known as Stage 6 and marks the central turning point which divides world history into BC (“before Christ”) and AD (Anno Domini – “in the year of the Lord”). These identifiers have been secularized as BCE (before current era) and CE (current era) without altering the world-changing significance of the turning point.

The present Kingdom
Then the King Himself comes to Earth! Jesus, Son of God, opens His ministry with these words: “The time is fulfilled, and the kingdom of God is at hand” (Mark 1.15). In Vaughan Roberts’ words, “God’s king had come to establish God’s Kingdom”. He teaches about God’s Kingdom and demonstrates God’s sovereign power through His miracles. His death and resurrection strikes the decisive blow against Satan and deals fully with sin and all its fallout. His victory paves the way for God’s Kingdom to come in power.

The arrival of Yeshua (יֵשׁוּעַ – which means “Savior” or “Deliverer” in Hebrew and is transliterated as “Jesus” from the Greek Iesous) was foreseen by the Old Testament prophets, foretold by an archangel, recognized by His mother and close associates, heralded by a heavenly host of angels, and honored by simple townspeople as well as devoted servants in Jerusalem and educated seers who traveled from afar.  He was sovereignly protected from the jealous wrath of Herod the Great and raised in a simple home in Nazareth of Galilee as the presumed son of a local carpenter.

Only when he had been called and set apart, immersed in the Jordan by John the Baptist, filled with the Holy Spirit, found victorious through a grueling 40-day spiritual battle, and launched into an anointed ministry of proclamation and miraculous demonstration did it become clear to virtually everyone that something dramatically remarkable had happened. For many He was an answer to their prayers that God would send His promised Savior to Israel with love, truth, healing, and salvation. For others Jesus presented a very serious threat to their authority. As John reports:

John 7:40-46 – When they heard these words, some of the people said, “This really is the Prophet.” Others said, “This is the Christ.” But some said, “Is the Christ to come from Galilee? Has not the Scripture said that the Christ comes from the offspring of David, and comes from Bethlehem, the village where David was?” So there was a division among the people over him. Some of them wanted to arrest him, but no one laid hands on him. The officers then came to the chief priests and Pharisees, who said to them, “Why did you not bring him?” The officers answered, “No one ever spoke like this man!”

Think for a moment about all the famous people who have lived and died throughout human history. Can you identify anyone who has been able to say and do so much in 3 brief years of public life? Has anyone else’s life had the profound and lasting impact that the life of His has had? As the result of Jesus’ brief ministry and the power in which He came, the world is now filling up with Christian churches, ministries, human services of compassion, and cultural evidences of the life and teachings of this remarkable man. According to recent global statistics, approximately one-third of the world’s population (nearly 2.4 billion people) identify as Christians. What do we know of the man whose ministry, truth, and witness spawned and inspired such an amazingly vibrant and robust following? The most authoritative source of definitive information about His life can be found in the contemporaneous accounts of four of His early followers in what are known as the Four Gospels: Matthew, Mark, Luke, and John. Even what has been written and preserved in these accounts only captures the highlights, however, as John noted:

John 21:25 – Now there are also many other things that Jesus did. Were every one of them to be written, I suppose that the world itself could not contain the books that would be written.

The Scope of our Narrative

What we will be able to cover within the broad scope of this website will only be only an introduction to the monumental birth, life, ministry, death and resurrection of the Savior of the World, a subject that can occupy a lifetime of prayer, study, and devotion. While reading what’s here, it may be helpful to begin or deepen your commitment to studying the Bible in an organized way on a regular basis, perhaps starting with the overlapping and corroborative testimonies recorded in the Gospel accounts (see Guide to the Four Gospels). It’s also a very helpful commitment to join or continue with others in the fellowship of a believing church where you can grow in your appreciation, knowledge, and trust of the God of the Universe.

By continuing to use the Up and Down buttons in the middle you can navigate directly through our timelines. In this section I have further subdivided the material in Chart 6 into three main time periods: Life to age 30, Ministry from age 30-33, and Passion Week. For each timeline we will continue taking a detour using the side buttons to investigate all the events and topics noted on the current chart. In the Ministry period we will look more closely at Jesus’ amazing public witness about the Kingdom of God with separate pages on His teachings, parables, and miracles with illustrative examples of each.