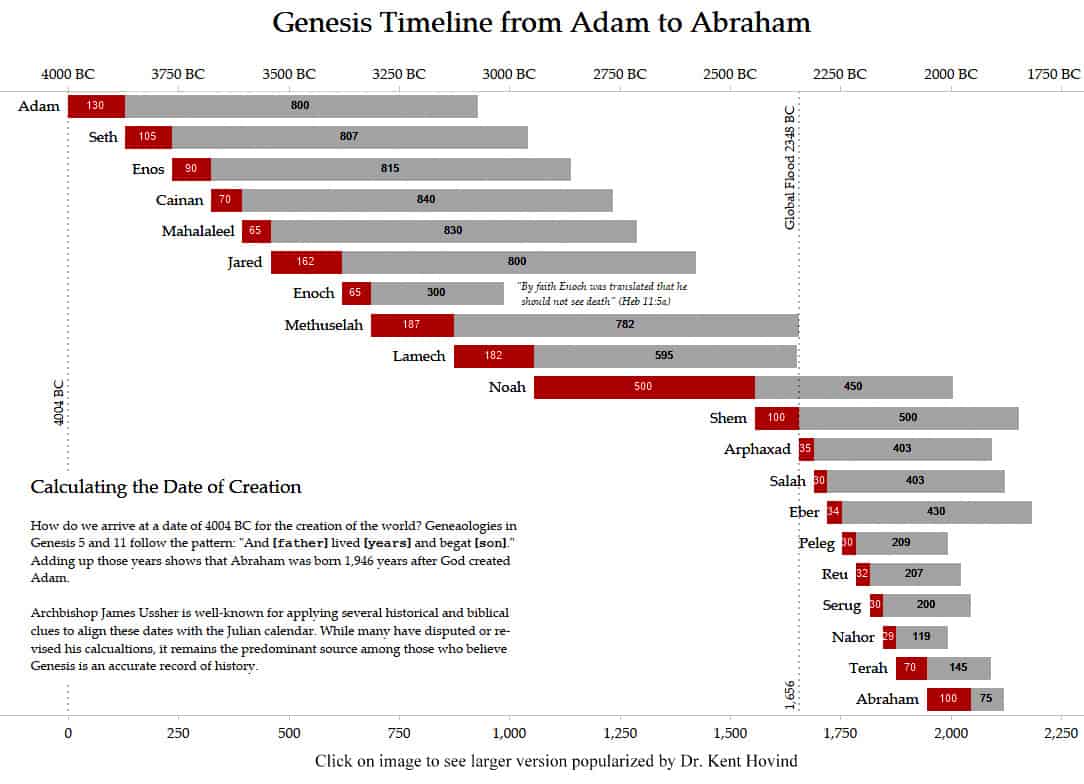 Who were the Patriarchs?

According to Wikipedia, the patriarchs (Hebrew: אבות‎ Avot or Abot, singular Hebrew: אב‎ Ab or Aramaic: אבא Abba) of the Bible, when narrowly defined, are Abraham, his son Isaac, and Isaac’s son Jacob, also named Israel, the ancestor of the Israelites. These three figures are referred to collectively as the patriarchs, and the period in which they lived is known as the Patriarchal Age.

More widely, as depicted in the chart above, the term patriarchs can be used to refer to the twenty ancient male Biblical ancestor-figures between Adam and Abraham. The first ten of these are called the antediluvian patriarchs, because they came before the Flood. The lifetimes listed above are derived from the currently authoritative Hebrew and Aramaic Masoretic Text (derived from copies made ~1,000 AD) of the Book of Genesis. However, there is serious controversy over the ages of those patriarchs listed in the postdiluvian period, due to significant discrepancies between their lifespans as calculated from what is recorded the Masoretic Text and that found in more original versions (read Genealogies of Genesis and watch this fascinating video if you have time).

The assumption in the Genesis account is that the patriarchs all settled in Mesopotamia, presumably nearby one another as a nomadic tribe. Even so, if we further assume that the age-related material presented in the Masoretic Text is correct in outlining a 2,000 year period for the twenty patriarchs as charted above, it’s still hard to imagine that Abraham could have spoken to Shem (Noah’s son), who surely talked to his great-grandfather Methuselah, who in turn could have spoken to Adam directly, the first man known to have communicated with God. Although the Bible never records that Adam and Methuselah or Abraham and Shem met, that possibility is one explanation for how an awareness of and faith in the living God could have been transmitted over two millennia through the patriarchal generational line.

As we discussed at the close of our previous Ancient Civilizations page, there is evidence that an awareness of God was disseminated over time by general revelation throughout the people groups of the world. However, in the case of Adam and Eve’s descendants that knowledge was enhanced by special revelation through oral history and direct contact with each other and the God of Creation. Thus we see in the brief Biblical accounts recorded from oral history in Genesis 5 that several of the antediluvian patriarchs had an awareness of and personal relationship with God of some description which had been passed down from one generation to the next:

Seth: When Adam had lived 130 years, he fathered a son in his own likeness, after his image, and named him Seth.   Genesis 5:3

Lamech: When Lamech had lived 182 years, he fathered a son and called his name Noah, saying, “Out of the ground that the LORD has cursed, this one shall bring us relief from our work and from the painful toil of our hands.”    Genesis 5:28-29

Following these brief annotations of the lives of Seth through Lamech, the story of Noah expands into significant detail in four chapters of Genesis 6, 7, 8, and 9, as we will illustrate and discuss on the next page.

Similarly brief accounts of the postdiluvian patriarchs resume in Genesis 10 noting those who followed Noah from Shem through the time of the Tower of Babel and leading up to Terah and Abraham.

Once we’ve examined the account of the Flood and taken a closer look at the circumstances surrounding the Tower of Babel, we will pick up the genealogical progression of the patriarchs with Terah and Abraham. 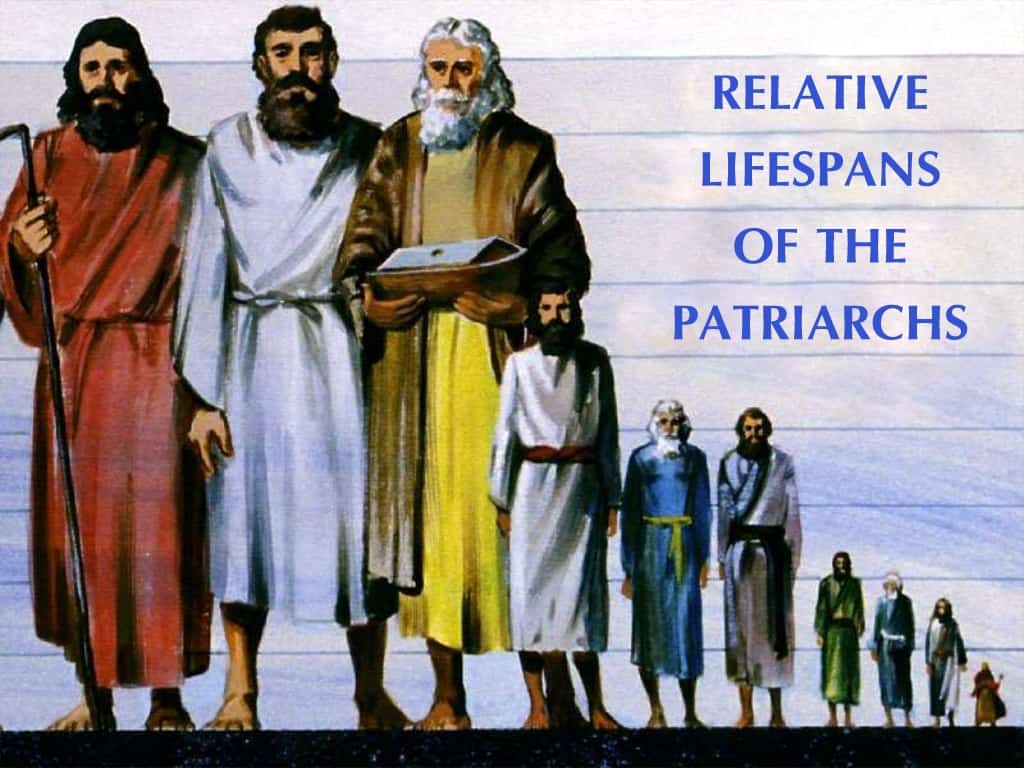 How long did they live?

With the exception of Enoch, all the antediluvian patriarchs reportedly lived nearly 1,000 years. Geneticist Dr. John Sanford and his colleagues plotted the ages of the biblical patriarchs and found a systematic drop-off in lifespans after 950-year-old Noah “in a way that could never happen by chance.” They point out that Genesis lifespans decline according to a well-defined exponential decay curve that matches biological decay curves known from the science of mutation accumulation. How coincidental! 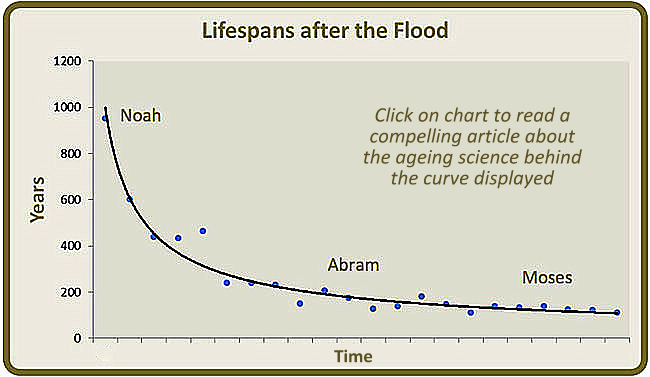 Look below and you’ll notice Up and Down buttons in the middle. Using these buttons you can navigate directly through our timelines. For each timeline we will take a detailed tour using the outside buttons to investigate historical events and people noted on the current chart (the preferred route, especially for your early visits to our website). Our Chart 2 tour will allow us to look more closely at the lives and times of the Patriarchs in Genesis in the context of concurrent events in world history. From this overview of the Ancient Patriarchs we will be going on to investigate the Biblical story of Noah and the Flood