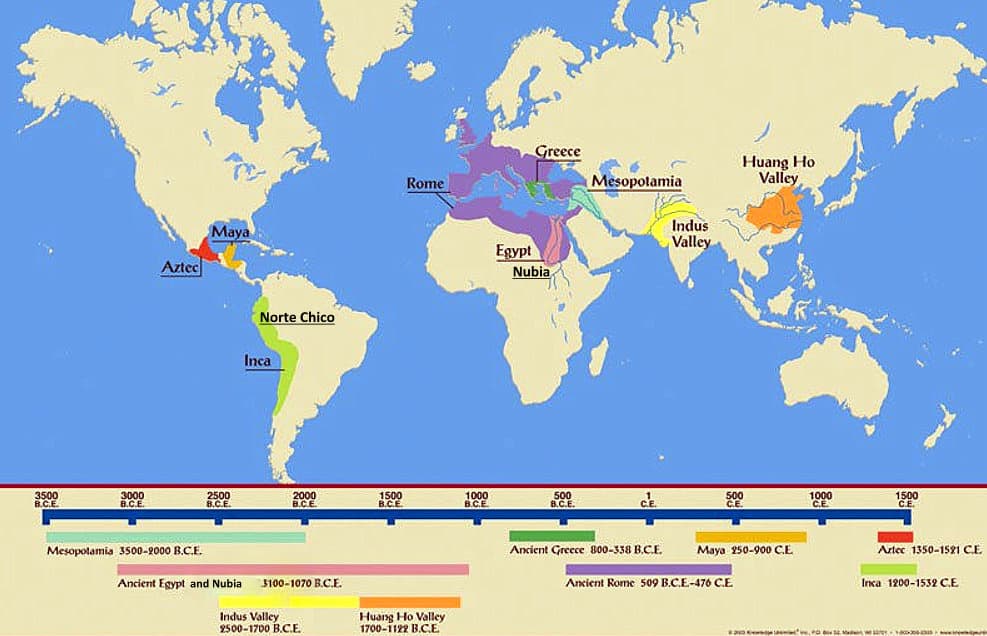 The Emergence of Ancient Civilizations

According to the National Geographic, “most anthropologists agree on some criteria to define a society as a civilization. First, civilizations have some kind of urban settlements and are not nomadic. With support from the other people living in the settlement, labor is divided up into specific jobs (called the division of labor), so not everyone has to focus on growing their own food. From this specialization comes class structure and government, both aspects of a civilization. Another criterion for civilization is a surplus of food, which comes from having tools to aid in growing crops. Writing, trading, artwork and monuments, and development of science and technology are all aspects of civilizations. However, there are many societies that scholars consider civilizations that do not meet all of the criteria above.”

Around the end of the Stone Age and start of Bronze Age civilizations, as defined above, began to develop independently in various parts of the world, first in the area around the land of Adam and Eve, known as Mesopotamia. We understand from the Biblical record in Genesis, Chapter 4 that after Adam and Eve fell away from God and were expelled from the Garden of Eden their sons’ generation had learned how to “work the soil” (Cain) and “keep flocks” (Abel), activities compatible with the Agricultural Revolution going on among humanity in the broader world. When Cain murdered his brother Abel, he was banished to “the land of Nod, east of Eden” in Mesopotamia where Genesis 4:17 reports that he found a wife and built a city.

By the time Jared was born in the sixth generation after Adam, a Sumerian civilization with a phonetic alphabet had become established in Mesopotamia, and two Biblical generations later during the time of Methuselah early civilizations were developing in Egypt to the southwest and the Indus Valley to the east. Then shortly before the birth of Noah, the tenth Patriarch in Adam’s genealogy, the Norte Chico civilization developed and flourished for several centuries along the northern coast of modern Peru. By the time of Noah’s Flood the building of Stonehenge had begun, the Great Pyramid of Giza had been built, and civilized developments were emerging in China, Nubian Africa, and around the Aegean Sea near Greece and Turkey.

These observations reckon well with a Biblical account that views the history of Adam and Eve and their descendants as human beings who differ from others on the Earth by being aware of and in a relationship with the God of Creation. Throughout this entire time the Biblical story of God’s interaction with mankind was being carried by oral tradition in the family lines of the ancient Patriarchs and being passed on to their children and anyone else who would listen to them, a topic we will be taking up in more detail as we discuss the Patriarchs and their roles in the plan of God. In this regard, the events leading up to Noah’s commission, the Flood, and the subsequent building of the Tower of Babel and scattering results of its destruction are particularly pertinent.

For various reasons many of the populated areas surrounding the civilizations mentioned above appeared to prosper for extended periods of time and then went into decline, so that by 1000 BC the stage was set for Greece and then Rome to assume ascendancy. What could have contributed to their decline? Speculations abound, but some have suggested that each civilization outgrew the capacity of its polytheistic worldview to sustain growth through human cooperation, fell into internal social decay, and then either imploded as a society or was unable to defend against outside invaders.

Where was God among the ancient peoples?

A compelling thesis for the decline of ancient civilizations has been described in a very convincing way by Don Richardson, author of the best-selling missionary journal Peace Child, in his remarkable book Eternity in Their Hearts. According to this well-established thesis, (unfortunately unpopular among secular scholars), the God of the Universe revealed Himself to all of the ancient peoples of the earth by general revelation (what Richardson calls “The Melchizedek Factor”). Researchers have discovered that by this process up to seven aspects of God’s presence and activity have been revealed to ancient cultures throughout the world:

Sadly, most ancient peoples, lacking adequate ways of recording and preserving the general revelation that they had received, eventually lost sight of God, were drawn by fear and deception into falsehood and polytheism, and regressively descended into more primitive conditions. Don provides numerous examples of tribal people groups who retained a clear cultural memory of at least several of these seven aspects and continued yearning for the one true God millennia after losing connection with Him, who then enthusiastically received the Gospel message when brought to them by culturally sensitive missionaries.Fortunately, the Hebrew people were able to recall and record their revelations and were, by the time of Abraham, prepared to receive more specific revelation, calling, and commission to carry the “good news” of a forgiving God who yearns to be reconciled to the people He has created. As we will see, this new commission of special revelation came to Abraham and has been growing in its influence ever since. Eternity in Their Hearts is a thoughtful book that casts a bright light, not only on missions but on the current state of our society, and is well worth reading and studying in depth.

Look below and you’ll notice Up and Down buttons in the middle. Using these buttons you can navigate directly through our timelines. For each timeline we will take a detailed tour using the outside buttons to investigate historical events and people noted on the current chart (the preferred route, especially for your early visits to our website). Our Chart 2 tour will allow us to look more closely at the lives and times of the Patriarchs in Genesis in the context of concurrent events in world history. From this overview of Ancient Civilizations our next stop will be to examine a timeline of the Ancient Patriarchs.