The Birth of the Ekklesia

Something new is coming

As we saw during our review of His final days, the last instructions Jesus gave to His disciples before His ascension were to remain in Jerusalem to receive the gift of the Holy Spirit which would empower them to carry out the Great Commission of sharing the good news of His coming, forgiveness, and love throughout the world. The Feast of Weeks, also known as Shavuot or Pentecost, was only a week away, and devout Jews from all over the surrounding nations were gathering in Jerusalem at the time.

Acts 1:3-14 – Jesus presented himself alive to them after his suffering by many proofs, appearing to them during forty days and speaking about the kingdom of God. And while staying with them he ordered them not to depart from Jerusalem, but to wait for the promise of the Father, which, he said, “you heard from me; for John baptized with water, but you will be baptized with the Holy Spirit not many days from now.”

So when they had come together, they asked him, “Lord, will you at this time restore the kingdom to Israel?” He said to them, “It is not for you to know times or seasons that the Father has fixed by his own authority. But you will receive power when the Holy Spirit has come upon you, and you will be my witnesses in Jerusalem and in all Judea and Samaria, and to the end of the earth.” And when he had said these things, as they were looking on, he was lifted up, and a cloud took him out of their sight. And while they were gazing into heaven as he went, behold, two men stood by them in white robes, and said, “Men of Galilee, why do you stand looking into heaven? This Jesus, who was taken up from you into heaven, will come in the same way as you saw him go into heaven.”

Then they returned to Jerusalem from the mount called Olivet, which is near Jerusalem, a Sabbath day’s journey away. And when they had entered, they went up to the upper room, where they were staying, Peter and John and James and Andrew, Philip and Thomas, Bartholomew and Matthew, James the son of Alphaeus and Simon the Zealot and Judas the son of James. All these with one accord were devoting themselves to prayer, together with the women and Mary the mother of Jesus, and his brothers.

The disciples were gathered in prayer, awaiting the upcoming celebration of the gift of the Torah (the “law” or “instructions” given by Moses in the first 5 books of the Scriptures) on Shavuot. While they waited in prayer the were probably wondering what would be involved in receiving this new gift Jesus had promised of being “baptized with the Holy Spirit” and questioning how on earth were they going to go about their commission to share the good news “in Jerusalem and in all Judea and Samaria, and to the end of the earth”? 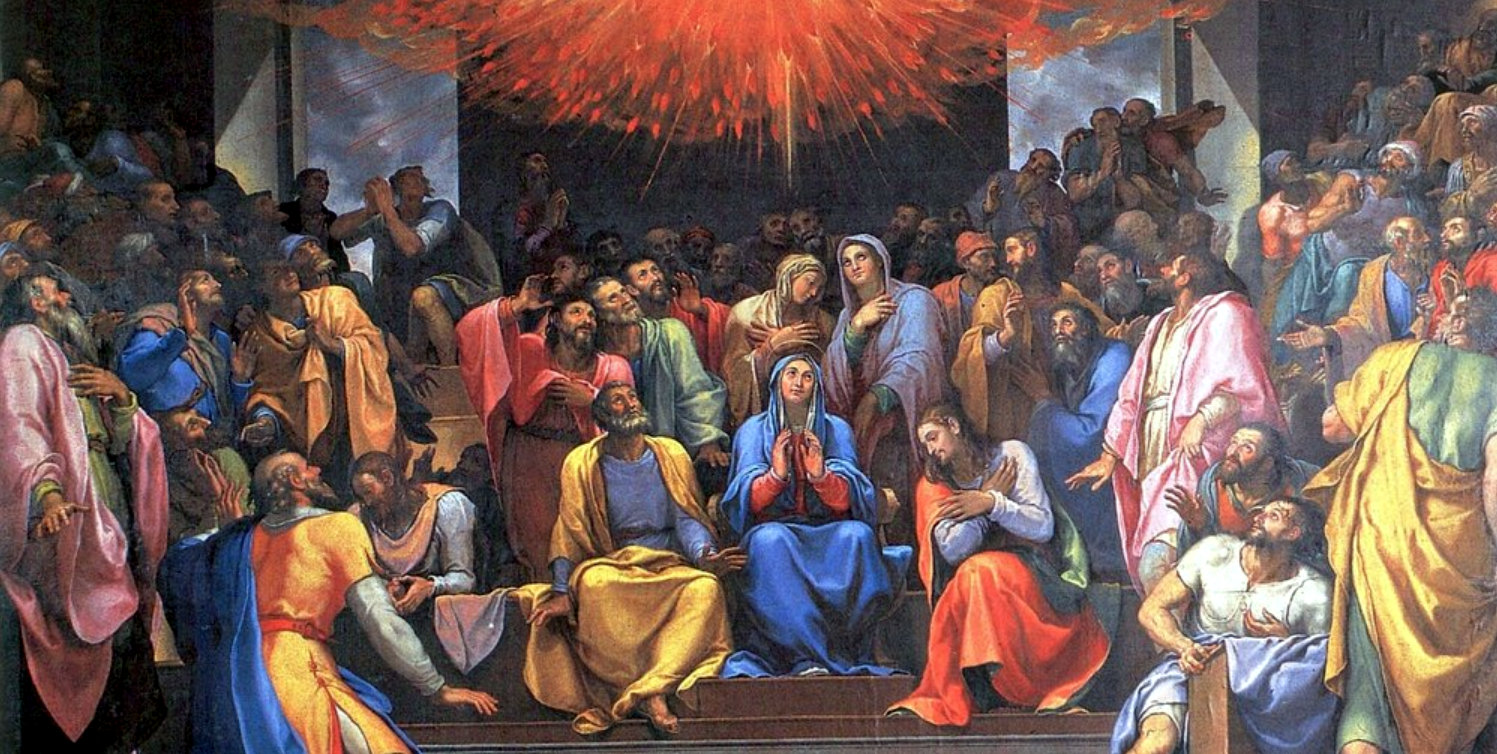 Power arrives from on high

Suddenly as they were beginning the celebrate the gift of Torah,  the Holy Spirit was poured out in their midst!

Acts 2:1-13 – When the day of Pentecost arrived, they were all together in one place. And suddenly there came from heaven a sound like a mighty rushing wind, and it filled the entire house where they were sitting. And divided tongues as of fire appeared to them and rested on each one of them. And they were all filled with the Holy Spirit and began to speak in other tongues as the Spirit gave them utterance.

Now there were dwelling in Jerusalem Jews, devout men from every nation under heaven. And at this sound the multitude came together, and they were bewildered, because each one was hearing them speak in his own language. And they were amazed and astonished, saying, “Are not all these who are speaking Galileans? And how is it that we hear, each of us in his own native language? Parthians and Medes and Elamites and residents of Mesopotamia, Judea and Cappadocia, Pontus and Asia, Phrygia and Pamphylia, Egypt and the parts of Libya belonging to Cyrene, and visitors from Rome, both Jews and proselytes, Cretans and Arabians—we hear them telling in our own tongues the mighty works of God.” And all were amazed and perplexed, saying to one another, “What does this mean?” But others mocking said, “They are filled with new wine.”

Peter was probably as amazed as the rest but was not perplexed. Filled with the Holy Spirit, and standing with the other apostles, he lifted up his voice and addressed them:

Acts 2:14-15 – “Men of Judea and all who dwell in Jerusalem, let this be known to you, and give ear to my words. For these people are not drunk, as you suppose, since it is only the third hour of the day. But this is what was uttered through the prophet Joel… “

Before you go any further click here to read Peter’s brief but anointed sermon, to which the assembled throng responded dramatically:

Acts 2:37-41 – Now when they heard this they were cut to the heart, and said to Peter and the rest of the apostles, “Brothers, what shall we do?” And Peter said to them, “Repent and be baptized every one of you in the name of Jesus Christ for the forgiveness of your sins, and you will receive the gift of the Holy Spirit. For the promise is for you and for your children and for all who are far off, everyone whom the Lord our God calls to himself.” And with many other words he bore witness and continued to exhort them, saying, “Save yourselves from this crooked generation.” So those who received his word were baptized, and there were added that day about three thousand souls. 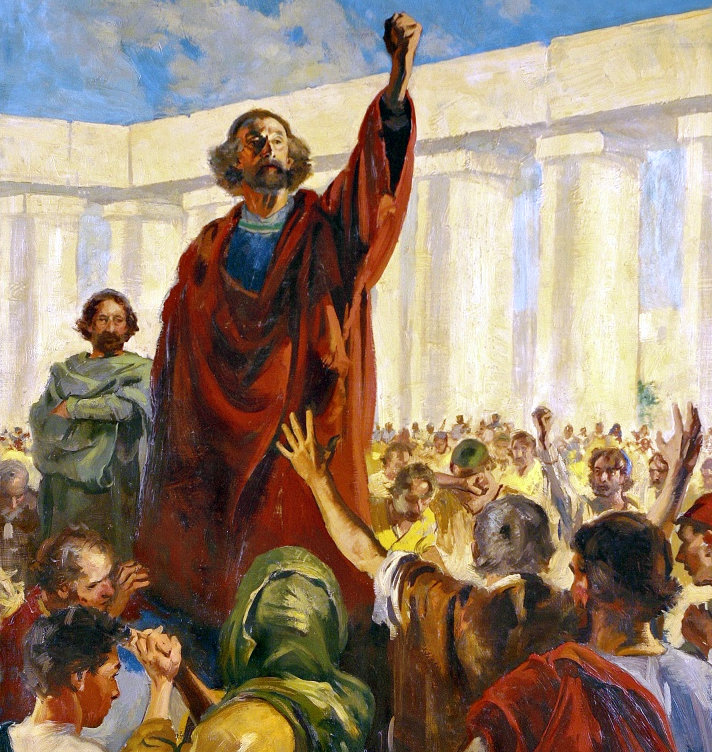 Somehow after hearing what Peter had to say, over the course of a day hundreds, even thousands of people came under the influence of the Holy Spirit, recognized the error of their ways, and sought God’s forgiveness and acceptance. They recognized that their attitudes and actions had been part of the problem, not part of the solution, and wanted to join themselves with others who had been similarly convicted to grow and learn how to live life better from then on. They recognized that those who had been with Jesus were possessed of a special knowledge and understanding, and they wanted to be part of the new life these disciples were demonstrating.

What would you call a group of people like this? It was an entirely new phenomenon. The Greeks had a word that was borrowed for the occasion, ekklesia [ἐκκλησία] (or ecclesia in Latin), which had an original meaning of “assembly, congregation, council” or literally a “gathering of those summoned” or “convocation”. In English versions of the Bible this has commonly been translated “Church” and refers to God’s redeemed people, called out from the broader community and gathered together for God’s purposes.  Click here for more about this term.

The birth of the Ekklesia

As a result of the outpouring of the Holy Spirit and the anointed preaching and teaching of the apostles on and after the day of Pentecost, the Ekklesia (also known as the Church and Fellowship of Believers) was birthed and began to grow:

Acts 2:42-47 – And they devoted themselves to the apostles’ teaching and the fellowship, to the breaking of bread and the prayers. And awe came upon every soul, and many wonders and signs were being done through the apostles. And all who believed were together and had all things in common. And they were selling their possessions and belongings and distributing the proceeds to all, as any had need. And day by day, attending the temple together and breaking bread in their homes, they received their food with glad and generous hearts, praising God and having favor with all the people. And the Lord added to their number day by day those who were being saved.

By continuing to use the Up and Down buttons in the middle you can navigate directly through our timelines. For each timeline we have been taking a detour using the side buttons to investigate events and topics noted in the currently active charts. In this detour we are looking on our side excursions more closely at the start, growth and expansion, and effects of the Ekklesia or Church over the centuries since the birth, ministry, death, and resurrection of Jesus of Nazareth.