The Tower of Babel – (page in process) 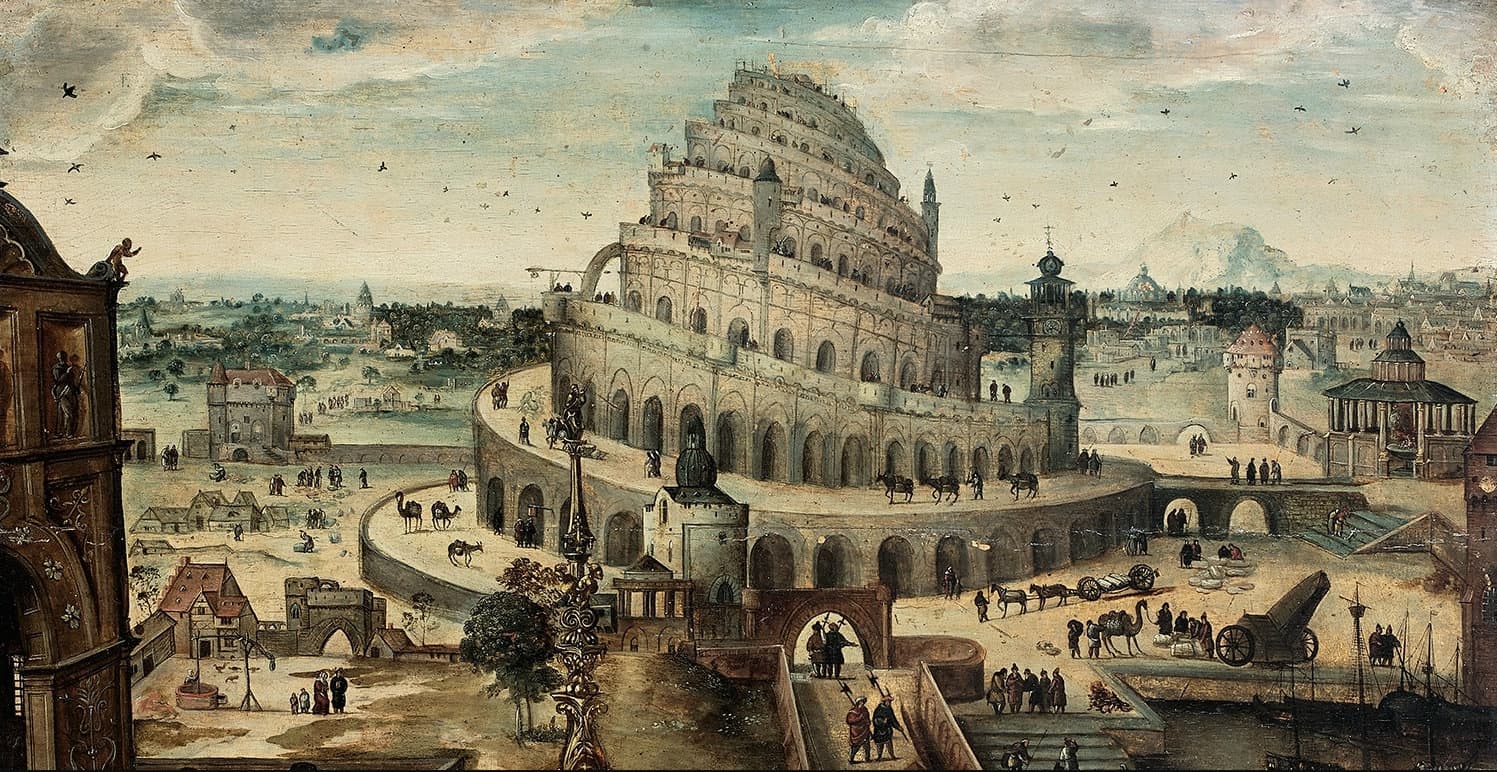 The cropped image of the Tower of Babel above, painted by Abel Grimmer c. 1602, is characteristic of many depictions that were painted during the Late Renaissance based on the Bible story as interpreted through the imaginations of the Middle Ages. Anachronisms abound in architecture, clothing, ships in harbor, implements of war, and other aspects that are fanciful for an undertaking that took place in Mesopotamia almost four millennia before. Click on the image for a similar one depicting Nimrod inspecting the Tower construction done by Pieter Bruegel in 1563. An

Immediately after the long story of Noah, his family and ark, the great flood, and the dispersion of Noah’s descendants throughout the surrounding world, we read the following remarkable account in Genesis:

Now the whole earth had one language and the same words. And as people migrated from the east, they found a plain in the land of Shinar and settled there. And they said to one another, “Come, let us make bricks, and burn them thoroughly.” And they had brick for stone, and bitumen for mortar. Then they said, “Come, let us build ourselves a city and a tower with its top in the heavens, and let us make a name for ourselves, lest we be dispersed over the face of the whole earth.”

And the Lord came down to see the city and the tower, which the children of man had built. And the Lord said, “Behold, they are one people, and they have all one language, and this is only the beginning of what they will do. And nothing that they propose to do will now be impossible for them. Come, let us go down and there confuse their language, so that they may not understand one another’s speech.” So the Lord dispersed them from there over the face of all the earth, and they left off building the city. Therefore its name was called Babel, because there the Lord confused the language of all the earth. And from there the Lord dispersed them over the face of all the earth.  Genesis 11:1-9

This is the entire Biblical narrative of this dramatic turn of events in human history. Let’s see if we can get any further perspective on the situation described here.

Scattering Judgment on Tower of Babel

Language promotes communication and understanding within the group, but it also accentuates the differences in traditions and beliefs between groups; it erects barriers between tribes, nations, regions, and social classes. The Tower of Babel is an archetypal symbol of the process that turns the blessing into a curse and prevents man from reaching into heaven. According to Margaret Mead, among the two million aborigines in New Guinea, 750 different languages are spoken in 750 villages, which are at permanent war with one another.
— Arthur Koestler, upon accepting the Sonning Prize at the University of Copenhagen

Etemenanki (Sumerian for “temple of the foundation of heaven and earth”) was a ziggurat dedicated to Marduk in the ancient city of Babylon. Originally 91 meters in height, it now exists only in ruins. Etemenanki possibly inspired the biblical story of the Tower of Babel.

The modern Google Map below has the location of Babylon and its Tower ruins clearly marked. 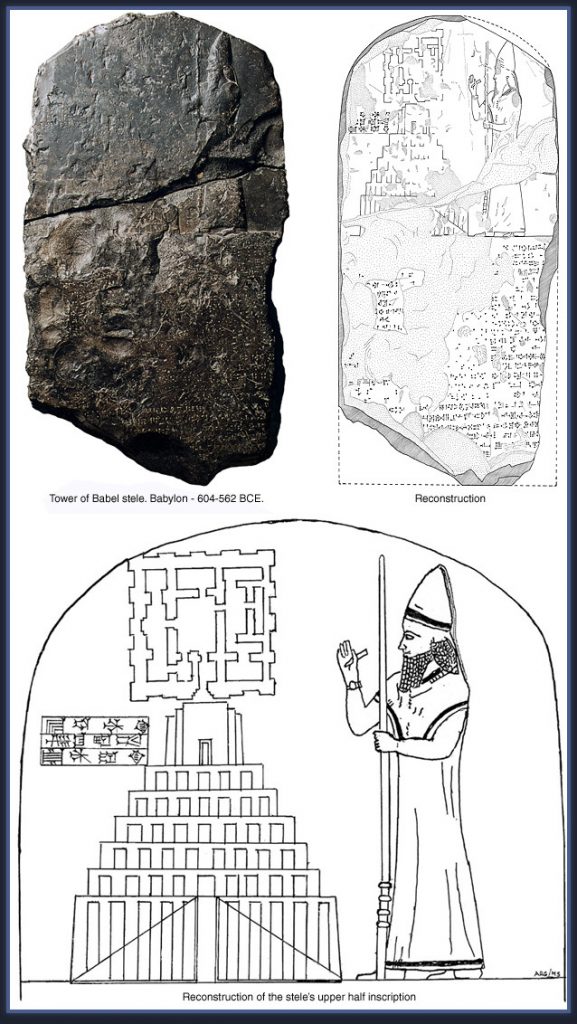 An ancient stele dating from 604-562 BC commemorating the Tower of Babel with its inscription sketched out beside it.

Look below and you’ll notice Up and Down buttons in the middle. Using these buttons you can navigate directly through our timelines. For each timeline we will take a detailed tour using the outside buttons to investigate historical events and people noted on the current chart (the preferred route, especially for your early visits to our website). Our Chart 2 tour from 6000 to 2000 BC has allowed us to look more closely at the lives and times of the Patriarchs in Genesis in the context of concurrent events in world history. We have now concluded our review of the events highlighted in Chart 2 and will be going on to Chart 3 that covers from 2000 to 1500 BC, starting with the life of Abraham.