God rests on the seventh day and sanctifies it

A 6-day timetable – While we’re resting a while and pondering the amazing work of Creation, let’s take a look at the chart below which outlines a fascinating speculative timetable developed by retired Johns Hopkins researcher Judith A. Giannini, PhD, and elaborated on in a paper available here. Like everything else about the Creation story, we have to remember that none of us were there to observe it, so any ideas anyone may have are, at best, educated speculations. We’re attempting to become educated by undertaking a penetrating analysis of the scriptural record while being informed by the most coherent understanding we can apprehend from contemporary scientific studies. We recognize that the most realistic hope we can entertain now is to “know in part” with the humble understanding that we don’t even quite know what we don’t know, leaving the question intact — “How do we really know what we know? By what mechanism(s) can we truly make sense of the world and our place in it?” 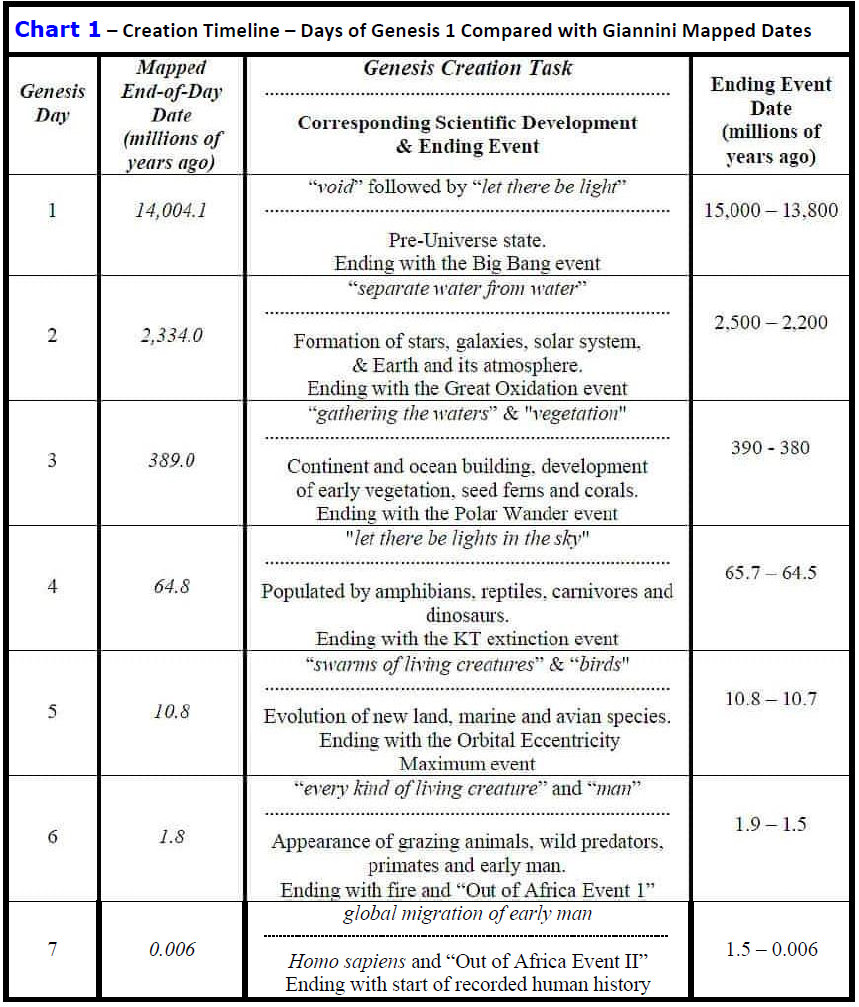 Some words of caution

When we look either back at the distant past or forward into the future, we do well to understand that in times outside the margins of recorded history we are always speculating about dates and times, hopefully using the best tools for understanding at our disposal and guided by the Spirit and Word of God. According to Stephen Davis,

“An evangelical is someone who believes, among other truths, that the Bible is the infallible Word of God and that Jesus Christ is the definitive answer of God for human redemption. How then do we respond as evangelicals to what appears prima facie as departures from long-held traditional views of creation? Evangelicals do not agree on how to understand the creation account in Genesis chapter 1. This may come as a surprise to many evangelicals who might be unaware of the diversity of interpretation to say nothing of their lack of comfort with any view that diverges from their own beliefs. Further, even raising the issue might seem untenable to many evangelical Christians since divergent views are often associated with either liberal views of Scripture, which deny inerrancy, or with atheistic, Darwinian evolution.”

Davis addresses these concerns in a seminary paper that you may appreciate. Grace Beecroft goes further into the topic of the various options we have when we evaluate our theology of origins in another thoughtful and well-researched paper, available here. Please keep an open mind as we do our best to cover the Biblical territory of our origins together. 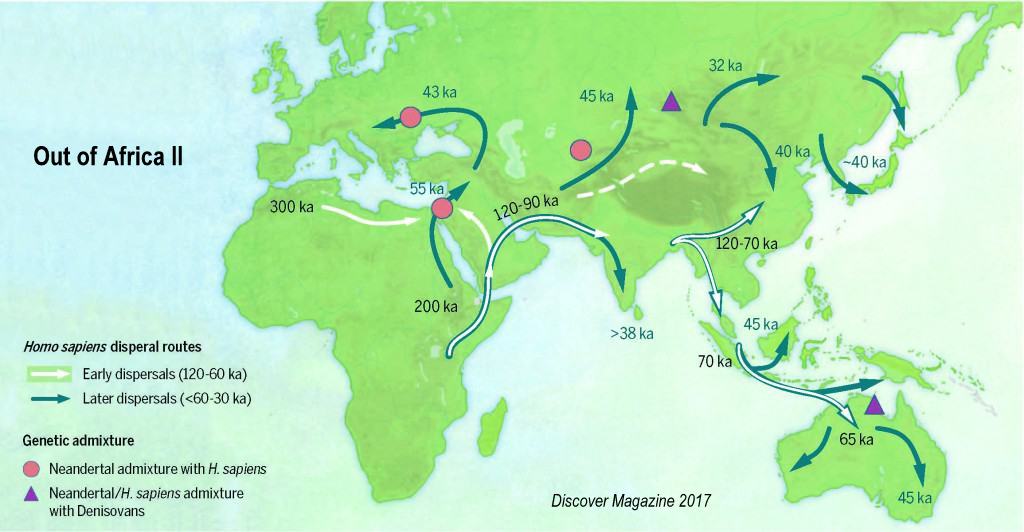 Out of Africa I and II

From a scientific point of view, there have been two distinct “Out of Africa” migrations. Out of Africa I began when archaic humans (Homo erectus and others in the Homo genus) began moving beyond Africa to Eurasia starting about 1.8 million years ago, as noted in Chart 1, and ending roughly 0.5 million years ago. In contrast, Out of Africa II refers to the more extensive migration of anatomically modern humans (Homo sapiens) after their emergence in Africa about 200,000 years ago and their progressive spread around the globe into the Agricultural Revolution 12,000 years ago and on to recorded history.

The prehistoric period known loosely as the Stone Age began around the time of this second migration (as depicted in the diagram above from an interesting recent article in Discover Magazine) and lasted until about 3,500 BC. Much is still being learned from a scientific standpoint about what happened during this epoch. An even more graphic presentation of the Out of Africa II migration is depicted in the engaging Science Insider “Path of Human Migration” video linked below as the next step on our tour.

The extra middle button below is the beginning of a navigation “short cut” trail through a series of timelines that starts with Chart 1 above and goes through history to Chart 8, which starts at the turn of the 21st Century where we’re living now and continues on to the Final Judgment and beyond. My recommendation, especially for your early visits to our website, is that you take the more detailed “scenic route” using the side buttons for the full tour until you’re ready to return and review the different epochs.