Divided Kingdom of Israel and Judah 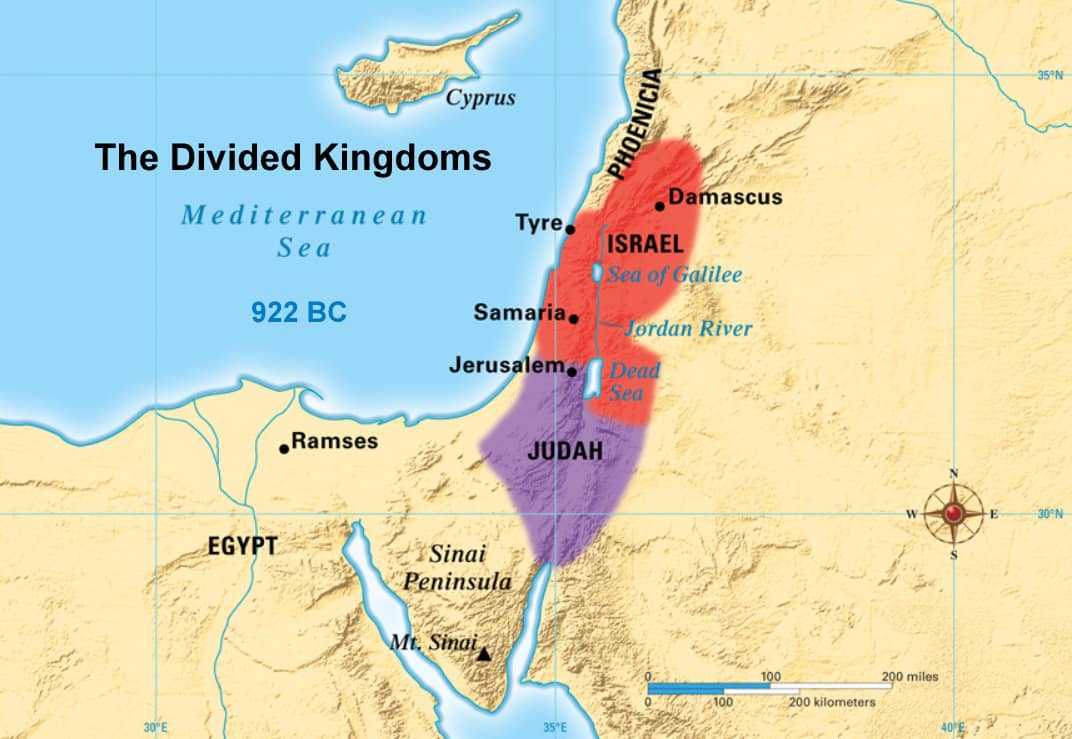 The Kingdom is broken in two

After Solomon died, his son Rehoboam became king, and Jeroboam returned from Egypt (1 Kings 12:1–2). But Rehoboam was a vain and foolish man. Jeroboam, a “mighty man of valor,” warned Rehoboam not to make the same mistake his father had made by taxing them heavily to finance a luxurious lifestyle (verses 3–4). Rehoboam defied the advice to lighten the yoke of oppression: “My father laid on you a heavy yoke; I will make it even heavier. My father scourged you with whips; I will scourge you with scorpions!” (1 Kings 12:14).

The people responded to Rehoboam’s harshness by rebelling against the new king and making Jeroboam king over Israel (1 Kings 12:16–20). Only the tribes of Judah and Benjamin followed Rehoboam, son of Solomon. The other ten tribes sided with Jeroboam. King Rehoboam gathered 180,000 warriors in an attempt to take back the ten tribes, but God prevented it, saying, “This is my doing” (1 Kings 12:24). So King Rehoboam returned to the capital of Jerusalem. Jeroboam reigned from Samaria.

Once established in the northern kingdom, King Jeroboam feared that, if the people traveled to the temple in Jerusalem to worship, they would return to Rehoboam. So he set up centers of worship in Bethel and Dan, building golden calves and telling the people, “It is too much for you to go up to Jerusalem. Here are your gods, Israel, who brought you up out of Egypt” (1 Kings 12:28). Jeroboam made shrines on the high places, installed priests who were not of the tribe of Levi, appointed a festival, and sacrificed at the altars (1 Kings 12:31–33). In spite of God’s offer to establish his dynasty in Israel, Jeroboam chose idolatry, and the prophet Ahijah told Jeroboam that his family would not endure (1 Kings 14).

As Jeroboam was turning people away from God in the northern kingdom, Rehoboam was turning people away from God in the southern kingdom. Rehoboam reigned in Jerusalem for seventeen years, but “he did evil because he had not set his heart on seeking the Lord” (2 Chronicles 12:14). After Rehoboam there were good kings and bad kings over Judah. Every other generation or so, a great king stepped forward and turned the people back to the true God. That never happened among the kings of the northern kingdom. They all followed the mold of Jeroboam. Jeroboam reigned over the ten tribes of Israel for twenty-two years and was succeeded by his son Nadab. But then Nadab was murdered after two years on the throne, and the assassin killed all of Jeroboam’s family, fulfilling Ahijah’s prophecy (1 Kings 15:25–30). All subsequent monarchs of the kingdom of Israel followed Jeroboam’s lead. Not one of them was faithful to Israel’s God.