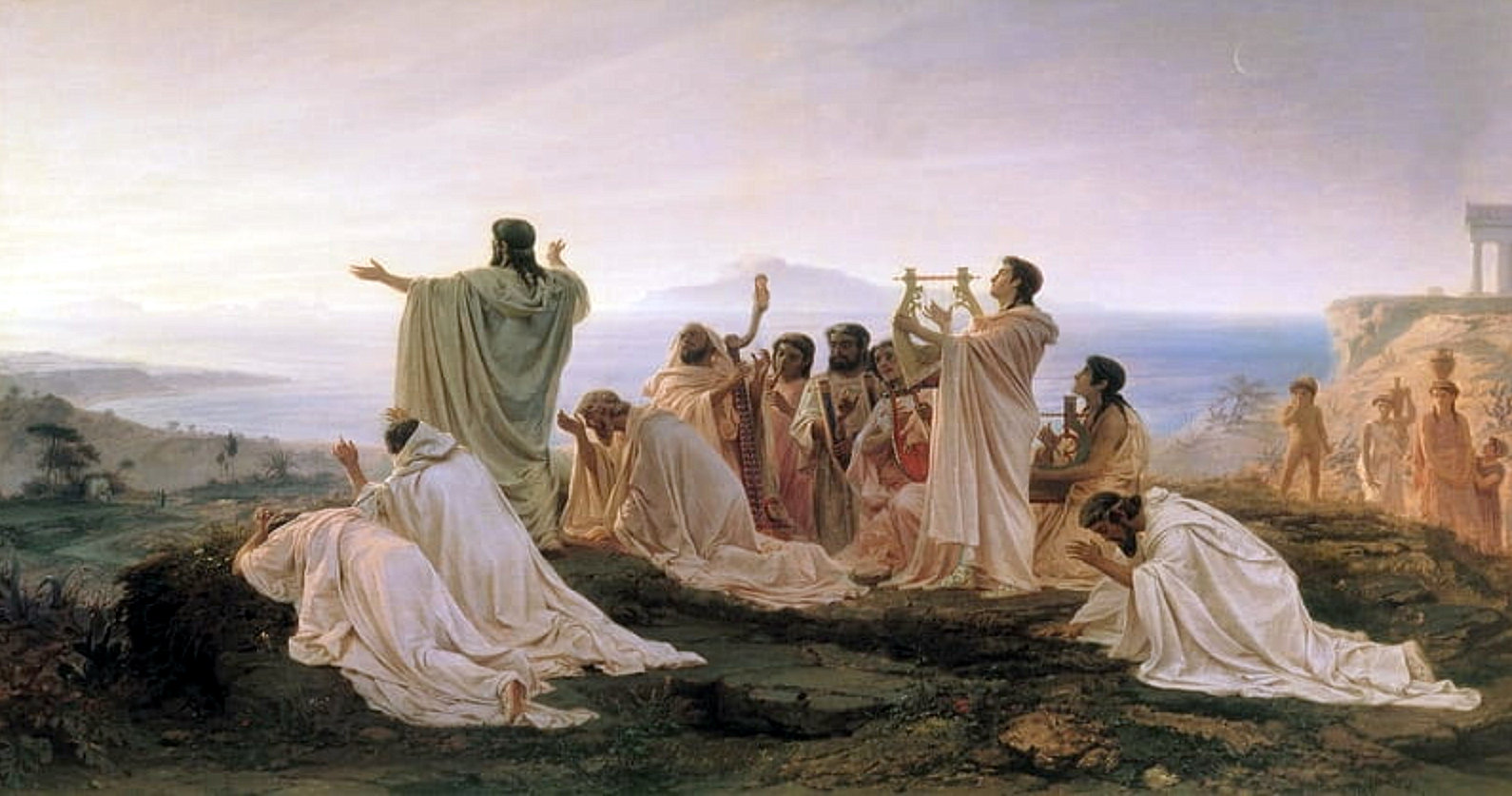 As noted earlier, the Parables have been called “earthly stories with heavenly meanings” in which Jesus frequently demonstrated His gift of teaching in using familiar examples from the natural order of the world to guide people’s understanding of the divine order found in the spiritual realm.

Click the following link for a Chart of 36 Parables of Jesus with Scripture links that you can review and possibly print for your reference. Of these, 12 address and describe aspects of the Kingdom of God, the central teaching around which all of Jesus’ other proclamations, teachings, and demonstrations of mercy and power revolve. The best way to understand the Parables is to read, study, and prayerfully meditate on them. 10 of the 12 Kingdom Parables are reproduced below and the last 2 will be examined in the upcoming section on Passion Week. Similarly, 18 of the remaining 25 parables are noted on the page that follows this one and the last 7 in the Passion Week section. After reading each Kingdom Parable, see if you can come up with an interpretation of it that makes sense to you. Reading them all together can give further meaning through context. However, as you read and ponder possible meanings please call to mind Jesus’ admonition recorded in John 3:3 where He said “Truly, truly, I say to you, unless one is born again he cannot see the kingdom of God.”

Parables about the Kingdom of God

Mark 4:26-29 – And he said, “The kingdom of God is as if a man should scatter seed on the ground. He sleeps and rises night and day, and the seed sprouts and grows; he knows not how. The earth produces by itself, first the blade, then the ear, then the full grain in the ear. But when the grain is ripe, at once he puts in the sickle, because the harvest has come.”

2. Parable of the Sower

Matthew 13:3-9 – “Listen! Behold, a sower went out to sow. And as he sowed, some seed fell along the path, and the birds came and devoured it. Other seed fell on rocky ground, where it did not have much soil, and immediately it sprang up, since it had no depth of soil. And when the sun rose, it was scorched, and since it had no root, it withered away. Other seed fell among thorns, and the thorns grew up and choked it, and it yielded no grain. And other seeds fell into good soil and produced grain, growing up and increasing and yielding thirtyfold and sixtyfold and a hundredfold.” And he said, “He who has ears to hear, let him hear.”

Matthew 13:24-30 – He put another parable before them, saying, “The kingdom of heaven may be compared to a man who sowed good seed in his field, but while his men were sleeping, his enemy came and sowed weeds among the wheat and went away. So when the plants came up and bore grain, then the weeds appeared also. And the servants of the master of the house came and said to him, ‘Master, did you not sow good seed in your field? How then does it have weeds?’ He said to them, ‘An enemy has done this.’ So the servants said to him, ‘Then do you want us to go and gather them?’ But he said, ‘No, lest in gathering the weeds you root up the wheat along with them. Let both grow together until the harvest, and at harvest time I will tell the reapers, “Gather the weeds first and bind them in bundles to be burned, but gather the wheat into my barn.”’”

4. Parable of the Mustard Seed

Matthew 13:31-32 – He said therefore, “What is the kingdom of God like? And to what shall I compare it? It is like a grain of mustard seed that a man took and sowed in his garden, and it grew and became a tree, and the birds of the air made nests in its branches.”

Matthew 13:33 – And again he said, “To what shall I compare the kingdom of God? It is like leaven that a woman took and hid in three measures of flour, until it was all leavened.”

Matthew 13:44 – “The kingdom of heaven is like treasure hidden in a field, which a man found and covered up. Then in his joy he goes and sells all that he has and buys that field.”

7. The Pearl of Great Price

Matthew 13:45-46  – “Again, the kingdom of heaven is like a merchant in search of fine pearls, who, on finding one pearl of great value, went and sold all that he had and bought it.”

8. Drawing in the Net

Matthew 13:47-50 – “Again, the kingdom of heaven is like a net that was thrown into the sea and gathered fish of every kind. When it was full, men drew it ashore and sat down and sorted the good into containers but threw away the bad. So it will be at the end of the age. The angels will come out and separate the evil from the righteous and throw them into the fiery furnace. In that place there will be weeping and gnashing of teeth.”

Matthew 18:21-34 – Then Peter came up and said to him, “Lord, how often will my brother sin against me, and I forgive him? As many as seven times?” Jesus said to him, “I do not say to you seven times, but seventy-seven times. “Therefore the kingdom of heaven may be compared to a king who wished to settle accounts with his servants. When he began to settle, one was brought to him who owed him ten thousand talents. And since he could not pay, his master ordered him to be sold, with his wife and children and all that he had, and payment to be made. So the servant fell on his knees, imploring him, ‘Have patience with me, and I will pay you everything.’ And out of pity for him, the master of that servant released him and forgave him the debt. But when that same servant went out, he found one of his fellow servants who owed him a hundred denarii, and seizing him, he began to choke him, saying, ‘Pay what you owe.’ So his fellow servant fell down and pleaded with him, ‘Have patience with me, and I will pay you.’ He refused and went and put him in prison until he should pay the debt. When his fellow servants saw what had taken place, they were greatly distressed, and they went and reported to their master all that had taken place. Then his master summoned him and said to him, ‘You wicked servant! I forgave you all that debt because you pleaded with me. And should not you have had mercy on your fellow servant, as I had mercy on you?’ And in anger his master delivered him to the jailers, until he should pay all his debt. So also my heavenly Father will do to every one of you, if you do not forgive your brother from your heart.”

10. The Workers in the Vineyard

Matthew 20:1-16 – “For the kingdom of heaven is like a master of a house who went out early in the morning to hire laborers for his vineyard. After agreeing with the laborers for a denarius a day, he sent them into his vineyard. And going out about the third hour he saw others standing idle in the marketplace, and to them he said, ‘You go into the vineyard too, and whatever is right I will give you.’ So they went. Going out again about the sixth hour and the ninth hour, he did the same. And about the eleventh hour he went out and found others standing. And he said to them, ‘Why do you stand here idle all day?’ They said to him, ‘Because no one has hired us.’ He said to them, ‘You go into the vineyard too.’ And when evening came, the owner of the vineyard said to his foreman, ‘Call the laborers and pay them their wages, beginning with the last, up to the first.’ And when those hired about the eleventh hour came, each of them received a denarius. Now when those hired first came, they thought they would receive more, but each of them also received a denarius. And on receiving it they grumbled at the master of the house, saying, ‘These last worked only one hour, and you have made them equal to us who have borne the burden of the day and the scorching heat.’ But he replied to one of them, ‘Friend, I am doing you no wrong. Did you not agree with me for a denarius? Take what belongs to you and go. I choose to give to this last worker as I give to you. Am I not allowed to do what I choose with what belongs to me? Or do you begrudge my generosity?’ So the last will be first, and the first last.”

Kingdom Parables 11 and 12 were given during Passion Week and will be reviewed in that section.

After you’ve read each Parable and developed an interpretation that makes sense to you, you may wish to click here to read a PDF of the complete text of all 12 Kingdom Parables accompanied by a brief commentary for each one that you can compare with your own thoughts. Two of the Parables also have an interpretation given by Jesus to the disciples.

By continuing to use the Up and Down buttons in the middle you can navigate directly through our timelines. For each timeline we have been taking a detour using the side buttons to investigate events and topics noted in the currently active charts. In our Ministry tour we are looking more closely at the Teachings, Parables, and Miracles of Jesus on our side excursions with examples of each.