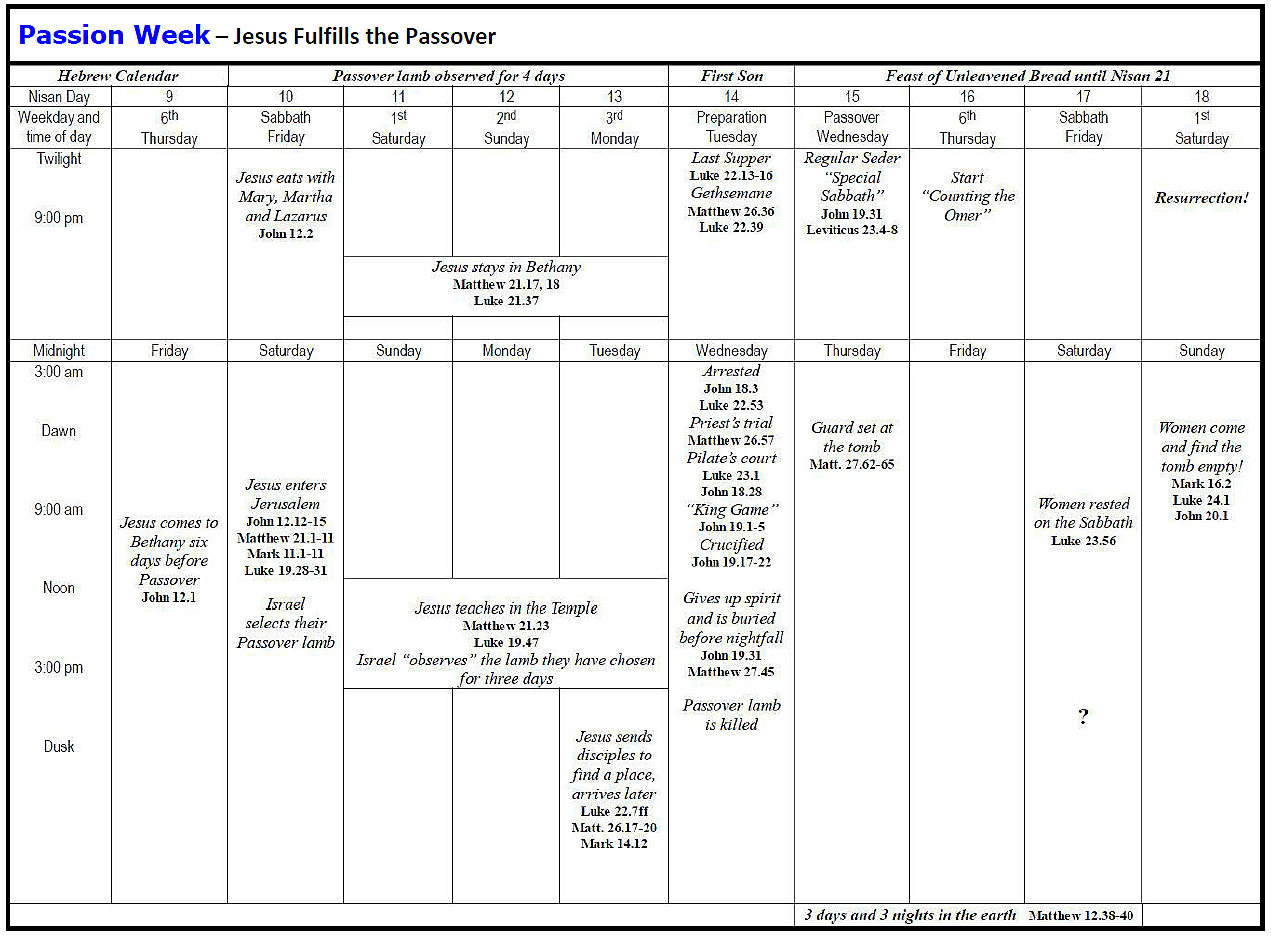 We in the western world have been raised in a culture dominated by a post-Constantinian Christian worldview of time, rather than one that is biblically Hebrew.

Rediscovering the worldview and time-frame of Christianity’s Hebrew heritage allows us to more fully appreciate the activities of Jesus of Nazareth at the time of His earthly ministry, crucifixion, death, and resurrection. The first month of the Hebrew calendar is the month of Nisan, which starts at the dawn of spring. On Nisan 10 every year, our Hebrew spiritual forefathers were mandated in Scripture to select a Passover lamb without blemish, observe the lamb for three days for signs of unworthiness, and sacrifice it on the fourth day as a ceremonial beginning to the celebration of the Lord’s Passover and the Exodus of God’s people from slavery in Egypt. Passover has been celebrated for millennia by the house of Israel in a traditional order or Seder on the evening of Nisan 15. In the year He was crucified, Jesus rode into Jerusalem on a donkey on Nisan 10, was observed teaching publicly in the Temple for three days, then was “selected” by Caiaphas and the Sanhedrin for sacrifice on a Roman cross on the Preparation Day, Nisan 14, and placed in the tomb just as the “special Sabbath” Passover feast was about to begin. In so doing, Jesus truly fulfilled the Passover by becoming our Passover lamb, sacrificed for our sins once and for all time.

How long did Jesus stay in the “heart of the earth” before He was raised from the dead? Jesus answered our question Himself in Matthew 12.38-40. How does His prophetic answer match up with the rest of Scripture and our gentile Good Friday, Easter Sunday tradition? How did Jesus’ calendar match up with ours? One attempt to solve this Passover puzzle can be found in the chart displayed above, labeled “Jesus Fulfills the Passover” which places the Last Supper Seder He celebrated with His disciples (whether it was a Seder is questioned by some) on the Tuesday evening of Preparation Day. His arrest and trial occurred that evening and overnight, followed by His crucifixion and burial on Wednesday afternoon just prior to the start of the annual Passover Sabbath celebration that evening. He then spent three days and nights in the tomb as He promised (see Matthew link above) and rose from the grave after sundown on Saturday evening in time for the tomb to be found empty Sunday morning. Others have raised similar questions about the timing of events during the first Passion Week. What is your solution? Read the Gospel accounts of Jesus final days (Matthew 21-28; Mark 11-16; Luke 19-24; John 12-20) and map out your own timeline.

While pondering these mysteries, let’s follow the buttons to see how Passion Week began for Jesus with His dramatic arrival in Jerusalem riding the colt of a donkey on a blanket of palm leaves followed by his daily teachings in the Temple prior to Passover.