The Trial of Jesus

The Scriptural Way of the Cross

This climactic last day of Jesus’ earthly life is covered in large part by the Crucifixion Narrative found in John 18-19. The other three Gospel accounts contain additional elements which, together with other historically venerated sites in Jerusalem, were assembled into an established historical pilgrimage in Jerusalem. When Palestine came under Islamic control and was less accessible to Christian pilgrims during the Middle Ages, the church codified the story of Christ’s Passion into a symbolic devotional pilgrimage called “The Stations of the Cross”, which was often represented in a series of painted or sculpted pictures on the inner walls of church sanctuaries.

Only eight of the traditional fourteen Stations of the Cross have clear scriptural foundations, while the other six are more legendary. To provide a version of this devotion more closely aligned with the Biblical accounts, Pope John Paul II introduced a new form of the devotion on Good Friday in 1991, called the Scriptural Way of the Cross. In 2007 Pope Benedict XVI approved this set of stations for meditation and public celebration, and in 2000 John Paul II gave his approval to add an optional Fifteenth Station in remembrance of the Resurrection of Jesus.

We will be presenting several key stages of the trials Jesus underwent after His arrest below, followed by an account of the crucifixion in the next page. Please review and meditate on fuller versions of this remarkable account using the links above. 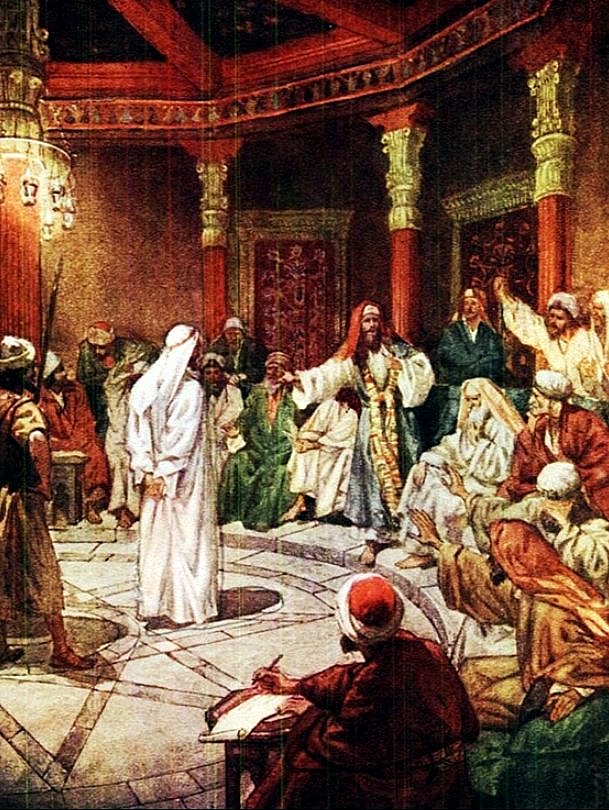 Trial before the Sanhedrin

John 18:12-14 – So the band of soldiers and their captain and the officers of the Jews arrested Jesus and bound him. First they led him to Annas, for he was the father-in-law of Caiaphas, who was high priest that year. It was Caiaphas who had advised the Jews that it would be expedient that one man should die for the people.

John 19-24 – The high priest then questioned Jesus about his disciples and his teaching. Jesus answered him, “I have spoken openly to the world. I have always taught in synagogues and in the temple, where all Jews come together. I have said nothing in secret. Why do you ask me? Ask those who have heard me what I said to them; they know what I said.” When he had said these things, one of the officers standing by struck Jesus with his hand, saying, “Is that how you answer the high priest?” Jesus answered him, “If what I said is wrong, bear witness about the wrong; but if what I said is right, why do you strike me?”

Luke 22: 66-71 – When day came the council of elders of the people met, both chief priests and scribes, and they brought him before their Sanhedrin. They said, “If you are the Messiah, tell us,” but he replied to them, “If I tell you, you will not believe, and if I question, you will not respond. But from this time on the Son of Man will be seated at the right hand of the power of God.” They all asked, “Are you then the Son of God?” He replied to them, “You say that I am.” Then they said, “What further need have we for testimony? We have heard it from his own mouth.”

What was the Sanhedrin’s issue with Jesus?

Many people have wondered why Israel’s leaders felt it necessary to deal with Jesus on such an urgent basis in the night, especially so close to Passover. Why not wait until after the Passover festival and deal with Him later? One article that addresses the question suggests that Caiaphas even “broke Jewish law to indict Jesus” and “held a rushed and rigged hearing to decide the prophet’s fate.” What was the urgency?

The primary problem had to do with the provocative behavior, teachings, actions, and activities of Jesus and His followers during and after His dramatic and triumphal entry into Jerusalem only days earlier. Jesus had suddenly become a very serious threat to the authority of Caiaphas and the Sanhedrin to govern. How could they compete with the passion of His followers and the power of His words and actions? Could they carry the hearts of the people, speak with moral authority, or perform miracles the way He did? Impossible. Furthermore, time was wasting. If they allowed the 1-week Passover holidays to begin when their hands would be tied by religious restriction without dealing with this, who knows what Jesus would be doing? From their perspective, the final solution to “the Jesus problem” had to be implemented immediately for the preservation of their way of leading the nation to continue.

In addition, the politics of Israel at the time played a serious part. Israel had become a theocratic nation governed by a unicameral council of 72 Jewish elders called the Sanhedrin, similar in some respects to our Senate but without our system of checks and balances. In a situation becoming familiar to contemporary politics, the Sanhedrin had split into three factions with different political perspectives that were deeply divided about Jesus: the Pharisees, Sadducees, and the minority party of the Essenes.

In the mind of Caiaphas, as the chief priest and Speaker of the Sanhedrin that year, it would clearly “be expedient that one man should die for the people.”

Matthew 26: 69-75 – Now Peter was sitting outside in the courtyard. One of the maids came over to him and said, “You too were with Jesus the Galilean.” But Peter denied it in front of everyone, saying, “I do not know what you are talking about!” As he went out to the gate, another girl saw him and said to those who were there, “This man was with Jesus the Nazarene.” Again he denied it with an oath, “I do not know the man!” A little later the bystanders came over and said to Peter, “Surely you too are one of them; even your speech gives you away.” At that he began to curse and to swear, “I do not know the man.” And immediately a cock crowed. Then Peter remembered the word that Jesus had spoken: “Before the cock crows you will deny me three times.” He went out and began to weep bitterly. 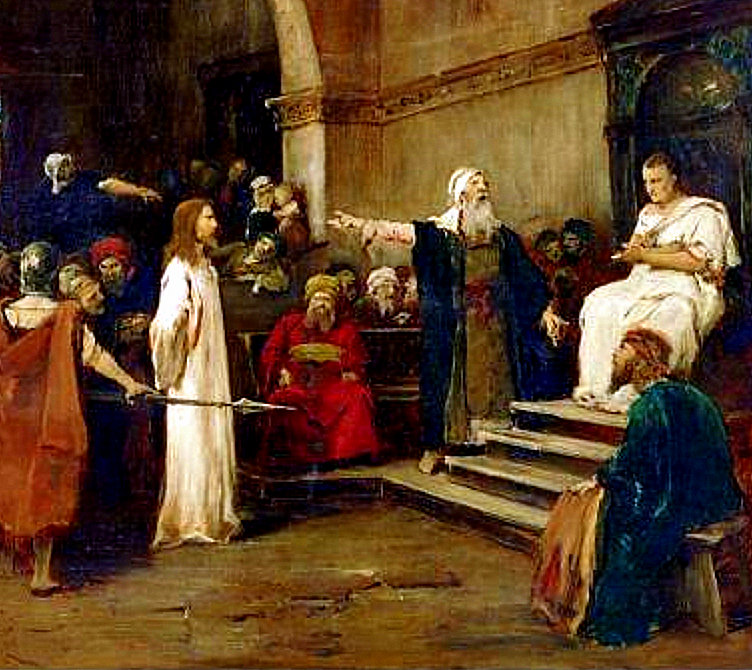 “Let him be crucified!”

Matthew 27:17-23 – So when they had gathered, Pilate said to them, “Whom do you want me to release for you: Barabbas, or Jesus who is called Christ?” For he knew that it was out of envy that they had delivered him up. Besides, while he was sitting on the judgment seat, his wife sent word to him, “Have nothing to do with that righteous man, for I have suffered much because of him today in a dream.”

Now the chief priests and the elders persuaded the crowd to ask for Barabbas and destroy Jesus. The governor again said to them, “Which of the two do you want me to release for you?” And they said, “Barabbas.” Pilate said to them, “Then what shall I do with Jesus who is called Christ?” They all said, “Let him be crucified!” And he said, “Why? What evil has he done?” But they shouted all the more, “Let him be crucified!” 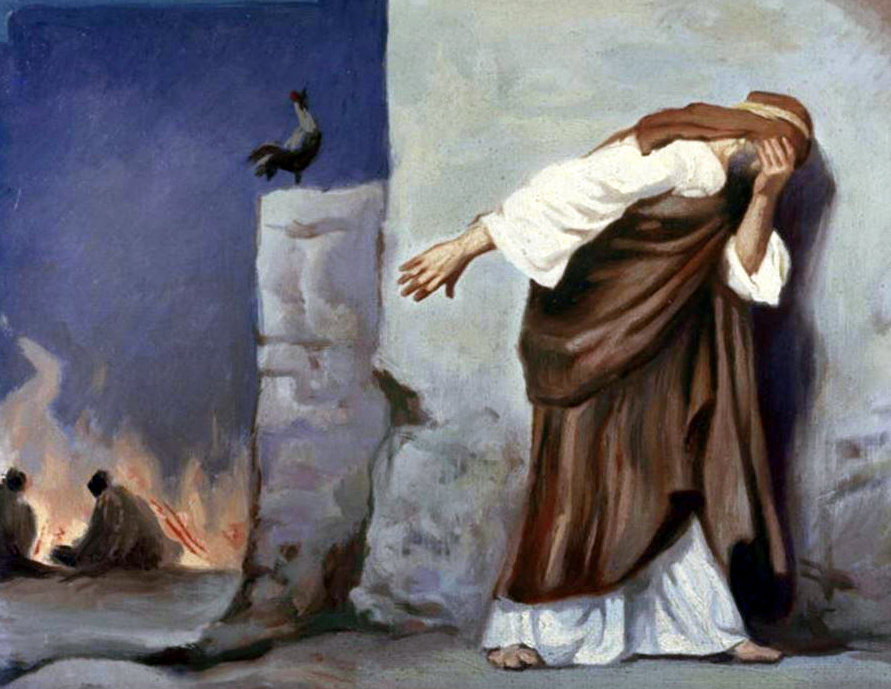 Mark 15: 1-8 – Very early in the morning the leading priests, the elders, and the teachers of religious law – the entire high council – met to discuss their next step. They bound Jesus, led him away, and took him to Pilate, the Roman governor. Pilate asked Jesus, “Are you the king of the Jews?” Jesus replied, “You have said it.” Then the leading priests kept accusing him of many crimes, and Pilate asked him, “Aren’t you going to answer them? What about all these charges they are bringing against you?” But Jesus said nothing, much to Pilate’s surprise.

Now it was the governor’s custom each year during the Passover celebration to release one prisoner—anyone the people requested. One of the prisoners at that time was Barabbas, a revolutionary who had committed murder in an uprising. The crowd went to Pilate and asked him to release a prisoner as usual. 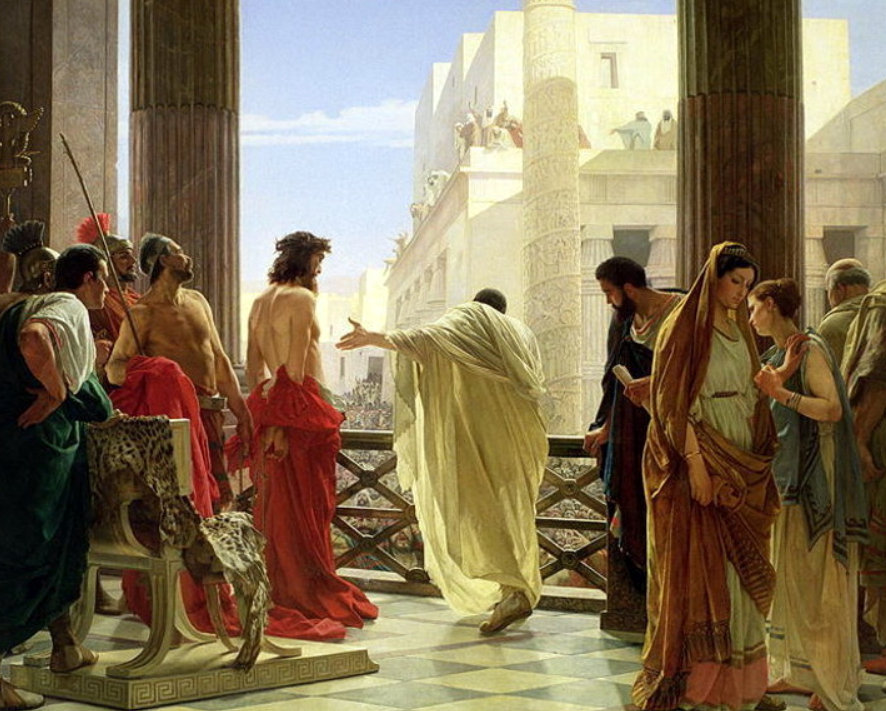 Why did Pilate cave in to the crowd?

John 19:1-16 – Then Pilate took Jesus and flogged him. And the soldiers twisted together a crown of thorns and put it on his head and arrayed him in a purple robe. They came up to him, saying, “Hail, King of the Jews!” and struck him with their hands. Pilate went out again and said to them, “See, I am bringing him out to you that you may know that I find no guilt in him.” So Jesus came out, wearing the crown of thorns and the purple robe. Pilate said to them, “Behold the man!” When the chief priests and the officers saw him, they cried out, “Crucify him, crucify him!” Pilate said to them, “Take him yourselves and crucify him, for I find no guilt in him.” The Jews answered him, “We have a law, and according to that law he ought to die because he has made himself the Son of God.” When Pilate heard this statement, he was even more afraid. He entered his headquarters again and said to Jesus, “Where are you from?” But Jesus gave him no answer. So Pilate said to him, “You will not speak to me? Do you not know that I have authority to release you and authority to crucify you?” Jesus answered him, “You would have no authority over me at all unless it had been given you from above. Therefore he who delivered me over to you has the greater sin.”

From then on Pilate sought to release him, but the Jews cried out, “If you release this man, you are not Caesar’s friend. Everyone who makes himself a king opposes Caesar.” So when Pilate heard these words, he brought Jesus out and sat down on the judgment seat at a place called The Stone Pavement, and in Aramaic Gabbatha. Now it was the day of Preparation of the Passover. It was about the sixth hour. He said to the Jews, “Behold your King!” They cried out, “Away with him, away with him, crucify him!” Pilate said to them, “Shall I crucify your King?” The chief priests answered, “We have no king but Caesar.” So he delivered him over to them to be crucified.

Why do politicians often put aside their own convictions and concerns, ignore warnings, and go with the crowd?

By continuing to use the Up and Down buttons in the middle you can navigate directly through our timelines. For each timeline we have been taking a detour using the side buttons to investigate events and topics noted in the current chart. In our Passion Week tour we are looking more closely at the activities of this crucial week. Having reviewed the events and activities leading up to and including His trial, we will continue on to His crucifixion, glorious resurrection, and subsequent ascension.