The Nativity of Jesus

It would be difficult to grow up in most of the interconnected world without hearing the “story” of the Birth of Jesus. Certainly in middle America, the tale is well-known from annual Christmas pageants at church, songs on the radio, and media presentations of all kinds. Snippets of the Bible text have been heard so many times in these contexts that it has lost its power as a representation of real history, coming across more like a fairy tale that has been romanticized and is unrelated to life today.

Let’s look at it again as adults with fresh eyes. Reread the account and think about this young woman, probably in her mid-teens and becoming eligible for marriage like other young women 2,000 years ago. She’s visited by an angel, receives an amazing message, becomes pregnant without intercourse, has to tell her betrothed, and then they both have to believe and accept the situation and deal with the scandal of being unwed parents in their home village of Nazareth.

Isaiah 7:14 – The Lord himself will give you a sign. Behold, the virgin shall conceive and bear a son, and shall call his name Immanuel.

Luke 1:26-38 – In the sixth month the angel Gabriel was sent from God to a city of Galilee named Nazareth, to a virgin betrothed to a man whose name was Joseph, of the house of David. And the virgin’s name was Mary. And he came to her and said, “Greetings, O favored one, the Lord is with you!” But she was greatly troubled at the saying, and tried to discern what sort of greeting this might be. And the angel said to her, “Do not be afraid, Mary, for you have found favor with God. And behold, you will conceive in your womb and bear a son, and you shall call his name Jesus. He will be great and will be called the Son of the Most High. And the Lord God will give to him the throne of his father David, and he will reign over the house of Jacob forever, and of his kingdom there will be no end.”

And Mary said to the angel, “How will this be, since I am a virgin?”

And the angel answered her, “The Holy Spirit will come upon you, and the power of the Most High will overshadow you; therefore the child to be born will be called holy—the Son of God. And behold, your relative Elizabeth in her old age has also conceived a son, and this is the sixth month with her who was called barren. For nothing will be impossible with God.”

And Mary said, “Behold, I am the servant of the Lord; let it be to me according to your word.” And the angel departed from her. 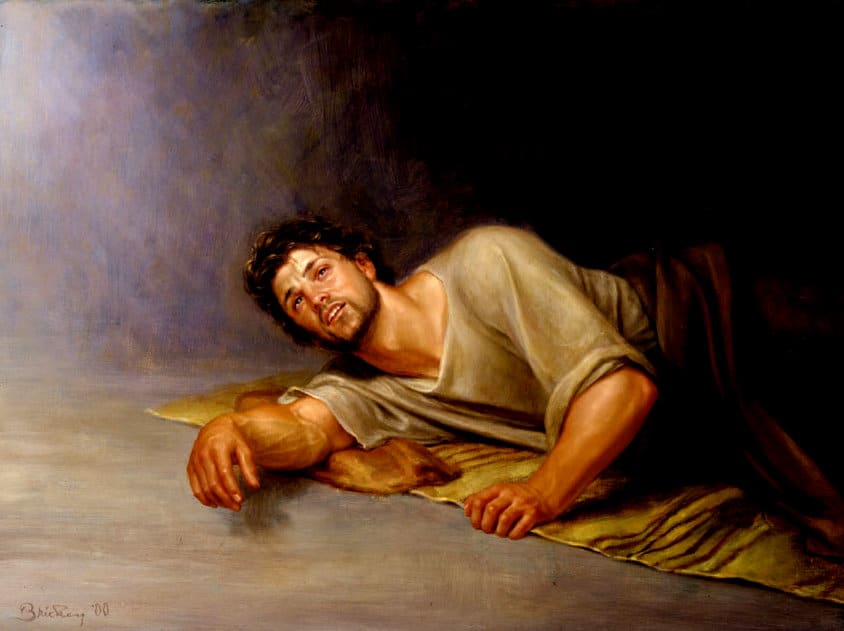 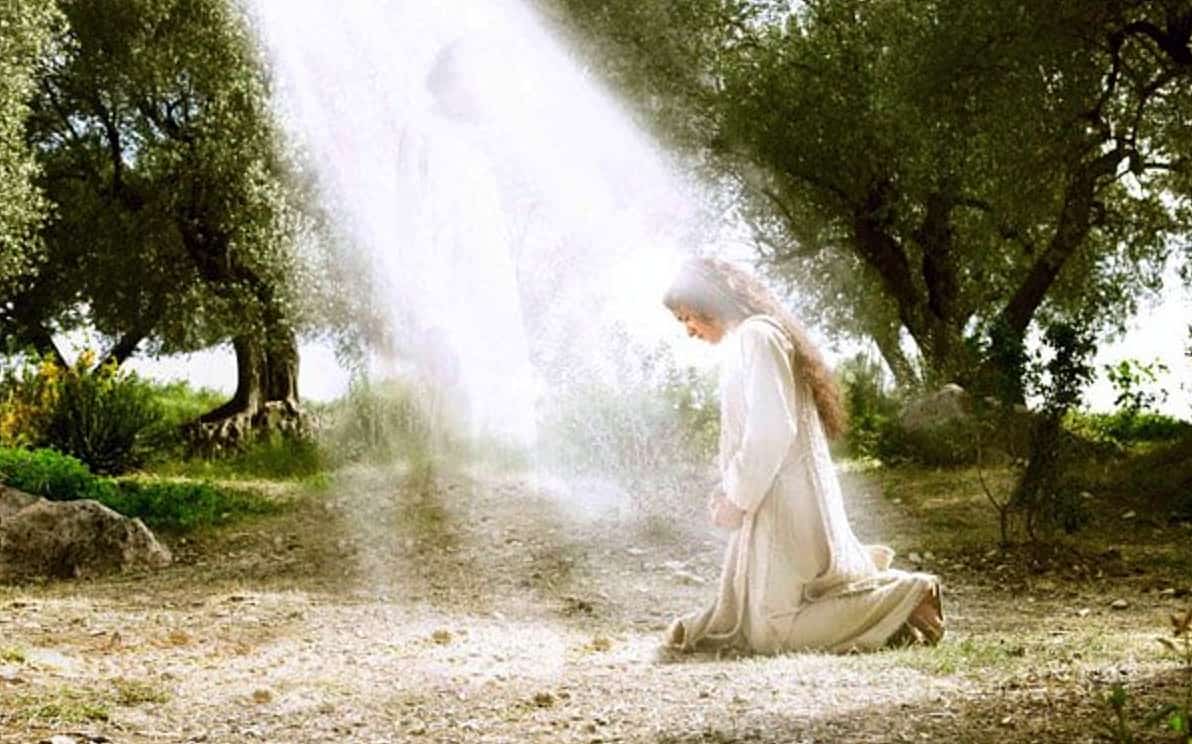 Luke 1:39-45, 56 – In those days Mary arose and went with haste into the hill country, to a town in Judah, and she entered the house of Zechariah and greeted Elizabeth. And when Elizabeth heard the greeting of Mary, the baby leaped in her womb. And Elizabeth was filled with the Holy Spirit, and she exclaimed with a loud cry, “Blessed are you among women, and blessed is the fruit of your womb! And why is this granted to me that the mother of my Lord should come to me? For behold, when the sound of your greeting came to my ears, the baby in my womb leaped for joy. And blessed is she who believed that there would be a fulfillment of what was spoken to her from the Lord.” [Mary praises God in Luke 46-55] And Mary remained with her about three months and returned to her home.

When his mother Mary had been betrothed to Joseph, before they came together she was found to be with child from the Holy Spirit. And her husband Joseph, being a just man and unwilling to put her to shame, resolved to divorce her quietly. But as he considered these things, behold, an angel of the Lord appeared to him in a dream, saying, “Joseph, son of David, do not fear to take Mary as your wife, for that which is conceived in her is from the Holy Spirit. She will bear a son, and you shall call his name Jesus, for he will save his people from their sins.” All this took place to fulfill what the Lord had spoken by the prophet: “Behold, the virgin shall conceive and bear a son, and they shall call his name Immanuel” (which means, God with us). When Joseph woke from sleep, he did as the angel of the Lord commanded him: he took his wife, but knew her not until she had given birth to a son. And he called his name Jesus.

Luke 2:1-7 –In those days a decree went out from Caesar Augustus that all the world should be registered. This was the first registration when Quirinius was governor of Syria. And all went to be registered, each to his own town. And Joseph also went up from Galilee, from the town of Nazareth, to Judea, to the city of David, which is called Bethlehem, because he was of the house and lineage of David, to be registered with Mary, his betrothed, who was with child. And while they were there, the time came for her to give birth. And she gave birth to her firstborn son and wrapped him in swaddling cloths and laid him in a manger, because there was no place for them in the inn. 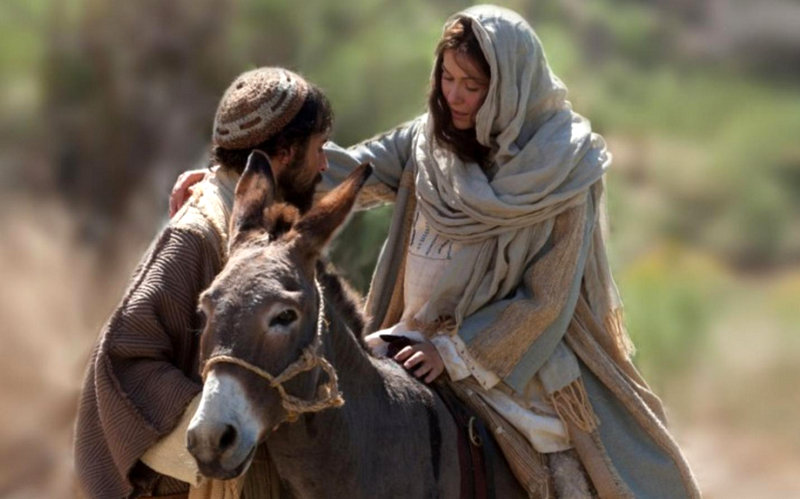 Miriam, the Mother of Jesus

What’s in a name? Mary’s name in the original manuscripts of the New Testament was based on her original Aramaic name מרים‎, translit. Maryam or Mariam, from which we arrive at Miriam. The English names Mary and Maria come from the Greek Μαρία, which is a shortened form of Μαριάμ, and is translated Maria in Latin. Both Μαρία and Μαριάμ appear in the New Testament.

Sometimes in the modern world we become argumentative, contentious, even jaded perhaps in our inner thoughts about the mother of Jesus. How holy and how worthy of honor was she? Is it all a fairy tale, a story? Was she really a virgin? Did she have other children? Did she even ever have sex? Was she bodily assumed into heaven? What was the scoop? The answers to some of these questions remain mysteries to this day, but the most reliable accounts we have confirm that she was a young virgin who was given perhaps the most challenging calling an ordinary human being could receive and handled it remarkably well, from start to finish. Whatever your background or thoughts, listen to the Ave Maria (which is drawn from Luke 1:28 and means, “Greetings, Maria!”) and honor this obedient young woman who joyfully endured so much for all of us.

Reception and dedication as an infant

Luke 2:8-38 – And in the same region there were shepherds out in the field, keeping watch over their flock by night. And an angel of the Lord appeared to them, and the glory of the Lord shone around them, and they were filled with great fear. And the angel said to them, “Fear not, for behold, I bring you good news of great joy that will be for all the people. For unto you is born this day in the city of David a Savior, who is Christ the Lord. And this will be a sign for you: you will find a baby wrapped in swaddling cloths and lying in a manger.” And suddenly there was with the angel a multitude of the heavenly host praising God and saying, “Glory to God in the highest, and on earth peace among those with whom he is pleased!”

When the angels went away from them into heaven, the shepherds said to one another, “Let us go over to Bethlehem and see this thing that has happened, which the Lord has made known to us.” And they went with haste and found Mary and Joseph, and the baby lying in a manger. And when they saw it, they made known the saying that had been told them concerning this child. And all who heard it wondered at what the shepherds told them. But Mary treasured up all these things, pondering them in her heart. And the shepherds returned, glorifying and praising God for all they had heard and seen, as it had been told them. And at the end of eight days, when he was circumcised, he was called Jesus, the name given by the angel before he was conceived in the womb.

And when the time came for their purification according to the Law of Moses, they brought him up to Jerusalem to present him to the Lord (as it is written in the Law of the Lord, “Every male who first opens the womb shall be called holy to the Lord”) and to offer a sacrifice according to what is said in the Law of the Lord, “a pair of turtledoves, or two young pigeons.” Now there was a man in Jerusalem, whose name was Simeon, and this man was righteous and devout, waiting for the consolation of Israel, and the Holy Spirit was upon him. And it had been revealed to him by the Holy Spirit that he would not see death before he had seen the Lord’s Christ. And he came in the Spirit into the temple, and when the parents brought in the child Jesus, to do for him according to the custom of the Law, he took him up in his arms and blessed God and said, “Lord, now you are letting your servant depart in peace, according to your word; for my eyes have seen your salvation that you have prepared in the presence of all peoples, a light for revelation to the Gentiles, and for glory to your people Israel.”

And his father and his mother marveled at what was said about him. And Simeon blessed them and said to Mary his mother, “Behold, this child is appointed for the fall and rising of many in Israel, and for a sign that is opposed (and a sword will pierce through your own soul also), so that thoughts from many hearts may be revealed.” And there was a prophetess, Anna, the daughter of Phanuel, of the tribe of Asher. She was advanced in years, having lived with her husband seven years from when she was a virgin, and then as a widow until she was eighty-four. She did not depart from the temple, worshiping with fasting and prayer night and day. And coming up at that very hour she began to give thanks to God and to speak of him to all who were waiting for the redemption of Jerusalem.

By continuing to use the Up and Down buttons in the middle you can navigate directly through our timelines. For each timeline we have been taking a detour using the side buttons to investigate events and topics noted in the currently active charts. In this detour we are looking on our side excursions more closely at the unusual circumstances of His birth and later upbringing in Nazareth prior to the start of His ministry years.