Calendar. We in the western world have been raised in a culture dominated by a post-Constantinian worldview of time and Christian faith, rather than one that is biblically Hebrew or even completely faithful to Scriptural understandings shared in both Testaments, Old and New. Our days begin and end at midnight, rather than the biblical breaking point of sunset. Our days are named after celestial bodies and Norse gods revered in pagan worship and our work week begins on Monday and ends with a day of rest on Sunday (the first day of the week), rather than continuing the biblical pattern that Jesus and His disciples adhered to of keeping Sabbath on the seventh day. Rediscovering the worldview and timeframe of our Hebrew heritage points us toward and allows us to more fully appreciate the activities of Jesus of Nazareth as the promised messiah at the time of His birth, earthly ministry, crucifixion, death, resurrection, ascension, and the promised outpouring of the Holy Spirit that followed.

“Blessed are those who wash their festal robes, so that they may have the right to the tree of life
and that they may enter the city by the gates.” Revelation 22:14

Years – The Jewish year nominally starts on the first day of the month of Tishri when the Levitical celebration of Rosh Hashanah, “the Head of the Year,” takes place. According to tradition, this is the day indicated by Scriptural calculations that God made Adam and Eve as the capstone of His creation of our universe and yields a number equivalent to the age of the world. To find the corresponding Jewish year for any year on the Gregorian calendar, add 3760 to the Gregorian number if it is before Rosh Hashanah or 3761 if it is after.

Months – Our Biblical charts and lists of festivals always start with Nisan as the first month of the year, however, as God instructed Moses when Passover was instituted:

This month shall be for you the beginning of months… the first month of the year for you. Exodus 12:2

Months in the Jewish calendar are based on lunar cycles. Towards the beginning of the moon’s cycle, it appears as a thin crescent. That is the signal for a new Jewish month. The moon grows until it is full in the middle of the month, and then it begins to wane until it cannot be seen. It remains invisible for approximately two days and then the thin crescent reappears and the cycle begins again.

The entire lunar cycle takes approximately 29½ days. Since a month needs to consist of complete days, a month is sometimes twenty-nine days long, and sometimes thirty. To keep the Jewish calendar synchronized with the seasons, a leap month called “Adar 2” as listed at the bottom of the following chart is inserted in “leap years” during seven of every nineteen years based on barley harvest times in Israel.

The first day of the month, as well as the thirtieth day of a long month, is called Rosh Chodesh (ראש חודש or the “Head of the Month”) and has semi-festive status. Knowing exactly when the month begins has always been important in Jewish practice, because the Torah schedules the Jewish festivals according to the days of the month.

Dates of Holidays – The story is told that one man in a synagogue was overheard to ask another, “When is Hanukkah this year?” The other man smiled slyly and replied, “Same as always: the 25th of Kislev.” This humorous comment makes an important point: the date of Jewish holidays does not change from year to year. Holidays are celebrated on the same day of the Jewish calendar every year, but the Jewish year is not the same length as a solar year on the CE calendar used by most of the western world, so the date shifts on the civil calendar. Click here for a chart of the exact Gregorian calendar dates of the major Jewish holidays from 2022 through 2026 CE. 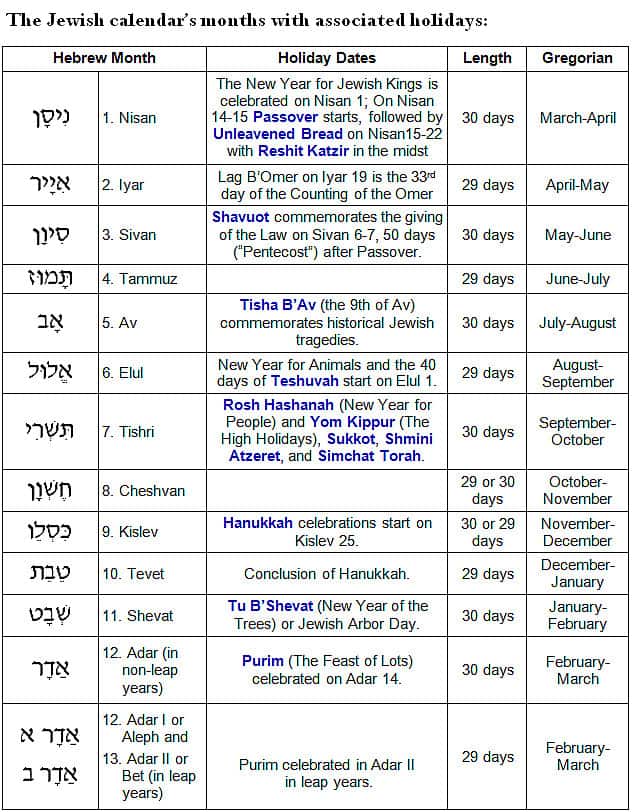 Sabbath. The first of Appointed Times set aside in Leviticus 23 commemorates God’s creation of the universe in six days, culminating with the creation of mankind on the Sixth Day, Then Genesis says that on the Seventh Day, God rested. Although the weekly Sabbath is technically not a festival in the sense that the others listed in Leviticus 23 are, it was first set aside in Exodus 20:8-11 as the 4th Commandment to be kept faithfully by God’s people..

“So God blessed the seventh day and made it holy, because on it God rested from all his work that he had done in creation.”   Genesis 2:1-3

Passover. Passover (פֶּסַח), the oldest and most important of Jewish religious festivals, celebrates God’s deliverance of the Hebrews from slavery in Egypt and his creation of the Israelite people. Jesus fulfilled the Passover when he instituted the Lord’s Supper during the Seder and was sacrificed the following day as the Paschal Lamb for the sins of mankind.