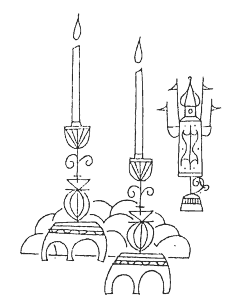 Hostess: (while lighting the holiday candles)

Blessed are you, O Lord our God, Ruler of the universe, who has sanctified us by your commandments and commanded us to kindle the light of the holiday. (or in Hebrew, as noted below with vowel marks)

And God said, “Let there be light,” and there was light. And God saw that the light was good. And God separated the light from the darkness.    Genesis 1.1-4

O God, through your Son you have bestowed on your people the brightness of your light; Sanctify this new fire, and grant that in this Paschal feast we may so burn with heavenly desires, that with pure minds we may attain to the festival of everlasting light; through Jesus our Messiah and Lord.

People (raising their wine cups together):

Blessed are you, O Lord our God, Ruler of the universe, Creator of the fruit of the vine.

Blessed are you, O Lord our God, Ruler of the universe, who has chosen us from among all peoples. You have sanctified and exalted us with your commandments. In love you have given us days of joy and seasons of gladness, even this Feast of Unleavened Bread, a memorial of our exodus from Egypt. You have chosen us for your service and caused us to share in the blessings of your holy festivals. Blessed are you, O Lord, who has sanctified Israel and the festive seasons.

But you are a chosen race, a royal priesthood, a holy nation, a people for his own possession, that you may proclaim the excellencies of him who called you out of darkness into his marvelous light. Once you were not a people, but now you are God’s people; once you had not received mercy, but now you have received mercy.    1 Peter 2.9-10

One person esteems one day as better than another, while another esteems all days alike. Each one should be fully convinced in his own mind. The one who observes the day, observes it in honor of the Lord. The one who eats, eats in honor of the Lord, since he gives thanks to God, while the one who abstains, abstains in honor of the Lord and gives thanks to God. For none of us lives to himself, and none of us dies to himself. For if we live, we live to the Lord, and if we die, we die to the Lord. So then, whether we live or whether we die, we are the Lord’s. For to this end Christ died and lived again, that he might be Lord both of the dead and of the living. Why do you pass judgment on your brother? Or you, why do you despise your brother? For we will all stand before the judgment seat of God;        Romans 14.5-10

Therefore let no one pass judgment on you in questions of food and drink, or with regard to a festival or a new moon or a Sabbath. These are a shadow of the things to come, but the substance belongs to Christ.     Colossians 2.16-17

Blessed are you, O Lord our God, Ruler of the universe, who has given us life, kept us safely, and brought us to this holy season.

All drink the first cup of wine (the cup of sanctification).

Hostess brings in a small pitcher of water with a bowl and hand towel and pours water over the leader’s hands.

Blessed are you, O Lord our God, Ruler of the universe, Creator of the fruit of the earth.

All eat the greens together.

Leader takes the middle matzah out of its cover and breaks it in two, replacing one half between the two whole matzot and putting the other half in a wrapper as the Afikoman to be shared at the end of the meal. While the Afikoman is being hidden the Leader discusses the origin of this ceremony and its significance for us today.

“Indeed, My servant shall prosper, be exalted and raised to great heights. Just as the many were appalled at him – so marred was his appearance, unlike that of man, his form, beyond human semblance – just so he shall startled many nations. Kings shall be silenced because of him, for they shall see what has not been told them, shall behold what they never have heard.”

“Who can believe what we have heard? Upon whom has the arm of the Lord been revealed? For he has grown, by His favor, like a tree crown, like a tree trunk out of arid ground. He had no form or beauty that we should look at him: no charm, that we should find him pleasing.

He was despised, shunned by men, a man of suffering, familiar with disease. As one who hid his face from us, he was despised, we held him of no account. Yet it was our sickness that he was bearing, our suffering that he endured. We accounted him plagued, smitten and afflicted by God; but he was wounded because of our sins, crushed because of our iniquities. He bore the chastisement that made us whole, and by his bruises we were healed.

We all went astray like sheep, each going his own way; and the Lord visited upon him the guilt of all of us.”

And his grave was set among the wicked, and with the rich, in his death – though he had done no injustice and had spoken no falsehood. But the Lord chose to crush him by disease, that, if he made himself an offering for guilt, he might see offspring and have long life, and that through him the Lord’s purpose might prosper. Out of his anguish he shall see it; he shall enjoy it to the full through his devotion.

“My righteous servant makes the many righteous; it is their punishment that he bears; assuredly, I will give him the many as his portion, he shall receive the multitude as his spoil. For he exposed himself to death and was numbered among the sinners, whereas he bore the guilt of the many and made intercession for sinners.”

Leader associates the scriptural description of the Messiah with the form of the matzah, and then elevates the remaining matzot in their cover and says:

Behold, the matzah, the bread of affliction our fathers ate when they were slaves in the land of Egypt. Let it remind us of people everywhere who are poor, hungry, and separated from God. Let it call to our minds those men and women today who are still enslaved and without freedom. May all in need come and celebrate Passover with us. May God redeem us from all bondage and affliction. Next year at this season may the whole house of Israel be free. And may all mankind discover and enjoy the liberty, justice, and peace that we have found in the Messiah. 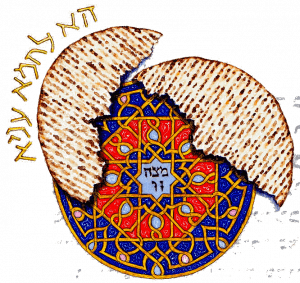